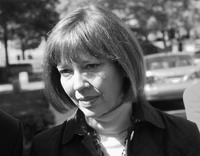 Miller will serve as an adjunct fellow and contributing editor to City Journal, the institute's quarterly magazine, the organization said in a release Thursday.

"As an adjunct fellow, I hope to continue writing about how best to enhance national security and public safety without sacrificing our freedom and civil liberties," Miller said in a statement.

Miller spent 85 days in jail for refusing to identify confidential sources during the investigation into the disclosure of a CIA agent's identity in 2003.

The agent, Valerie Plame, was married to ex-ambassador Joseph Wilson, who had publicly accused the Bush administration of doctoring prewar intelligence about weapons of mass destruction in Iraq.

In March, I. Lewis "Scooter" Libby, a top aide to Vice President Dick Cheney, was convicted of lying and obstructing the investigation. President George W. Bush commuted Libby's sentence in July, sparing him from a 2 1/2-year prison term.

Trial testimony showed that Bush secretly declassified a portion of a prewar intelligence estimate that Cheney sent to Libby to leak to Miller to rebut Wilson's criticism. Miller interviewed Libby three times in 2003.

Miller fought efforts by special prosecutor Patrick Fitzgerald to have her testify before a grand jury investigating the leak, but eventually she agreed to, saying Libby had given her permission.

She later resigned from the paper after editors and reporters publicly questioned her reporting on the existence of weapons of mass destruction in Iraq in the run-up to the war.

Ultimately, Deputy Secretary of State Richard Armitage admitted he was the one who leaked Plame's identity to reporters, saying he did not realize Plame's job was covert.