The father of a missing British girls expected interview to Portuguese police, a day after detectives questioned the 4-year-old's mother for almost 11 hours. 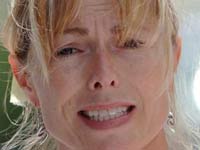 Kate McCann left a police station in Portimao, a town in Portugal's Algarve region, around 1 a.m. (0000 GMT) after answering questions from detectives investigating the disappearance of her daughter Madeleine in the area more than four months ago.

She looked gaunt and tired.

Her lawyer Carlos Pinto de Abreu told reporters that police had not named her as a suspect.

"Kate was held throughout the whole day as a witness and she remains a witness," he said without elaborating.

Kate McCann did not speak to the media. Police, who are barred by law from discussing ongoing investigations, made no comment.

Police summoned the couple after receiving new forensic evidence in a case that has gripped Europe since Madeleine vanished from her Algarve vacation apartment May 3.

Police spokesman Olegario Sousa said authorities have received some results from forensic tests of the apartment, but declined to elaborate on the findings.

The tests - on specks of blood, items of clothing and other objects in the apartment - were conducted at a British laboratory.

The couple has stayed in the Algarve since Madeleine vanished from the apartment where she was sleeping with her 2-year-old twin siblings.

Her parents were having dinner in the hotel's pool-side restaurant with vacationing friends and said they checked on their children at regular intervals.

In recent months, they have attended meetings with the police together. Officials described those meetings as informal, saying they wanted to keep the parents informed of developments in the case.

The McCanns have run an Internet campaign to find their daughter. A fund they started to help find missing or abducted children has raised more than 1 million pounds (EUR 1.5 million; US$2 million).

They have also visited several countries where she could have been taken by an abductor and met with foreign officials. They recently indicated they may soon return to Britain.