Villagers from Eskimo communities where alcohol is banned regularly visit bars and liquor stores - not just to drink, but to get totally drunk. 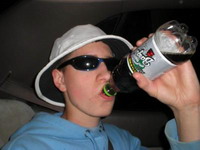 Day and night, drunks can be seen staggering along Front Street, slumped against buildings, and passed out near the tourist shops or along the seawall on the Bering Sea. Police cart off the worst of them to dry out at the hospital, where the emergency room often reeks of alcohol with as many as eight drunks at a time vying for beds.

Some never make it out of Nome alive. They drink themselves to death or pass out in the below-zero Fahrenheit cold, where they can count themselves lucky if they merely lose some fingers or a limb to frostbite. Many simply vanish, presumably swallowed by the icy waters of Norton Sound. Over the past two decades, dozens have died of exposure or drowned.

"The level of alcoholism is intense," said Greg Smith, who runs the Norton Sound Health Corp.'s outpatient substance abuse program. "The most dangerous pattern of drinking is binge drinking and it is firmly entrenched here. It's been built into the drinking culture."

The U.S. has more than 500 dry communities, and it is not unusual for residents to flock to another town to do their drinking. But some of the worst binge drinking is associated with a few regional hubs like Nome that draw people from Native and American Indian communities across vast expanses of countryside.

One big reason is this: Many Indian reservations and Eskimo villages are in extremely remote areas and ban not only the sale of alcohol, but possession, too. In other parts of the country, many dry communities allow alcohol possession, and a bar is usually just a short drive away.

These regional drinking hubs include:

- Whiteclay, Nebraska. It has a population of 14, yet about 4 millions cans of beer are sold each year in four stores there, mostly to American Indians. It is just yards away from South Dakota's Pine Ridge Indian Reservation, where alcoholism is rampant despite a ban on the sale and possession of alcohol.

- Gallup, New Mexico. It has long been branded Drunk Town, USA. It is surrounded by Navajo, Hopi and Zuni Pueblo lands where alcohol is prohibited. The town of 20,000 now bans Sunday alcohol sales and a county tax on liquor has been imposed.

- Flagstaff, Arizona. It is 72 miles (116 kilometers) from Tuba City on the Navajo Reservation, and the closest place to get a legal drink. Wanda MacDonald, director of the Navajo outpatient treatment center in Tuba City, said on the stretch of highway between the town of 8,000 and Flagstaff, she once counted 149 white crosses marking the sites of fatal car accidents - most of them because of drinking.

Experts and activists say the heavy drinking involves only a fraction of the U.S.'s Native population but perpetuates one of the oldest and ugliest stereotypes.

"The most common perception among the general population is the firewater myth, that Indians physically can't hold alcohol. It's just not true," said Fred Beauvais, a researcher at Colorado State University at Fort Collins who has studied the issue for three decades. "A lot of genetic research has been done on that and there's no evidence for a specific genetic factor for Native populations."

Instead, experts link alcohol abuse among Natives to poverty, hopelessness, loss of culture, and perhaps habits learned generations ago from hard-drinking settlers, trappers, traders and miners.

American Indians and Alaska Natives have a 550 percent higher rate of alcohol-related deaths than nonnative Americans, a disparity blamed in part on inadequate health care.

Nome, population 4,000, is best known as the finish line of the 1,100-mile (1,770-kilometer) Iditarod sled dog race and is situated in a region the size of Louisiana, with 15 mostly dry Inupiat and Yupik villages, some as much as 200 miles (322 kilometers) away.

It has six bars, four liquor stores and two private clubs that sell booze, and annual alcohol sales total $5.5 million (4.02 million EUR), which is equal to more than half of the city's annual budget.

The drinking crowd swells dramatically during the Iditarod and when Alaska's oil-royalty checks - last year's windfall was about $1,100 (805 EUR) - are distributed to nearly every man, woman and child in the state each fall. But even on the slowest nights, it is not unusual to encounter someone who has passed out.

Newman Savetilik comes to Nome to quench his thirst for whiskey. Savetilik, 50, lives in the village of Shaktoolik, 130 miles (209 kilometers) from Nome, and feeds himself by fishing and hunting moose.

"When I come to Nome I got alcohol problems," he said with eyes half-shut. "I'm not like that in Shaktoolik."

Nome's boozing history was born with the town after gold was discovered in 1898, bringing thousands of hard-drinking fortune hunters. The gunslinger Wyatt Earp operated the Dexter, the most ornate of 50 saloons lining Front Street in the Gold Rush heyday, when the town's population swelled to 20,000.

Nowadays, Nome police officers estimate they spend a third of their time tending to intoxicated people - some repeatedly - and making arrests for drunken driving and such booze-fueled crimes as domestic violence and assault.

Alcohol is involved in 90 percent of the 1,000 or so criminal cases around the region that are prosecuted each year, said District Attorney John Earthman.

Three-day protective holds are the primary tool employed by police to deal with people so incapacitated they could fall victim to a crime. Police logged 326 holds in the first seven months this year and 632 in all of 2006, according to Police Chief Paul Burke, a former state trooper who began his new job a few months ago and has made it his mission to clean up Front Street.

He has asked his officers to conduct more bar checks and watch out for lawbreakers, such as businesses selling to already intoxicated people or to minors. But Front Street merchants generally do a good job of policing their workers for fear of losing their liquor licenses, he said. Overly intoxicated people get kicked out, but still manage to keep drinking.

"In the early '80s, when I first got here, the bars were open until 5 a.m.," City Manager Randy Romenesko said. "Obviously there are lots of things that can be done, but the question is does anyone want to do them. Bottom line, it's a community decision."

Some mental health experts say there will be no real progress until Nome gets an inpatient rehab center - one that incorporates Native sweat lodges, talking circles and songs and dances. Nome's only residential rehab center closed eight years ago, its managers citing dwindling state and federal support. The nearest facility is almost 200 miles (322 kilometers) away in Kotzebue.

Meanwhile, the regional Native corporation has launched an education program for high school students to discourage drinking and restore appreciation of their culture.

"I want them to be inspired and empowered and feel their self-worth, that they can accomplish something," said program coordinator Kirbi Fullwood.

A bar at the Nome Nugget Inn stopped serving alcohol two years ago, specializing instead in Vietnamese drip coffee, when Thuy Nguyen's family bought it.

"I think Nome can do without one more bar," she said. "We'd rather get people jacked up on caffeine."