A man with camouflage paint on his face and a fake gun tried to break into billionaire Warren Buffett's house. But a scuffle with a security guard made him change his mind. 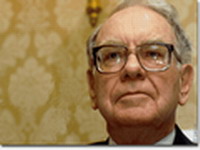 The security guard found the man, dressed all in black, on the home's front porch and confronted him, police said. The man struck the guard on the head, then fled and remained at large Thursday.

Neither Buffett, who was home at the time, nor his wife was injured, police said.

Forbes lists Buffett is the world's third-richest man, with an estimated net worth of around $52 billion (38 billion EUR). The chairman and chief executive officer of Omaha-based Berkshire Hathaway Inc. still lives in the same ungated, 5,830-square-foot (541-square-meter) home he bought in 1958 for $31,500.

Police described the case as an attempted robbery but said the suspect never entered the home.