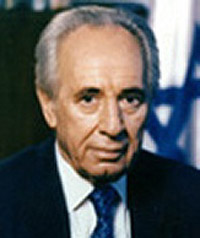 Israeli President Shimon Peres met with Pope Benedict XVI during the visit to Italy amid an international push for peace in the Middle East.

The meeting took place in the papal summer retreat of Castel Gandolfo, in the hills south of Rome. The Vatican did not immediately release details of the talks, the first since Peres became president in July.

Peres, holding five days of talks with political and business leaders in Italy, said Wednesday that recent meetings between Israeli and Palestinian leaders and the flurry of diplomatic activity in the Middle East could be the most promising developments yet in efforts to bring peace to the region.

"The overall atmosphere is encouraging," he said after meeting in Rome with Italian Premier Romano Prodi.

Benedict has issued several appeals for peace in the Middle East in recent months.

The Vatican and Israel established diplomatic relations in 1993. However, a long-standing tax dispute has irritated relations between the two sides, and is seen by Israel as the main obstacle to wider cooperation.

The Vatican is seeking ways to lessen its tax burden as one of the significant land owners in the Holy Land and wants access to Israeli courts to handle any quarrels over ownership.

Israel strongly resists giving any special tax exemptions to the Vatican and has offered to create a special panel to oversee property cases involving the Vatican. Israel fears that giving special tax terms to the Vatican could open the door for other churches and groups to seek similar loopholes.

This weekend Peres travels to an international political and finance conference on Lake Como, which annually gathers world leaders, including statesmen from Arab countries.

21:11
Ukraine blows up ammonium nitrate to accuse Russia of chemical attack
19:35
German Leopard 2A4 heavy tanks spotted in Ukraine
18:42
Russian large landing ships disappear from naval base in Novorossiysk
17:46
Ukraine can skip Membership Action Plan on its way to NATO
17:34
Azovstal militants reveal how many days they can hold out
16:47
Russia and Ukraine reach agreement to evacuate wounded from Azovstal
16:12
Expert says why Kyiv was interested in nuclear weapon before Russian operation started
15:33
Putin at CSTO summit: Russia does not have any issues with Sweden or Finland
14:47
Renault Russia to start producing Moskvich cars
13:18
Bilateral trade between Russia and Finland collapses
Hotspots and Incidents
Ten Ukrainian military leave Azovstal, declare readiness to negotiate