Benedict's visit concludes Sunday with a Mass at Vienna's St

Austrian authorities said more than 3,500 police officers and soldiers were being deployed to secure the pope. Meanwhile, elite and bomb squads were checking venues and equipment Thursday, the eve of Pope Benedict XVI's arrival.

Although security was heavy for the three-day visit, which begins Friday, the precautions were not a response to this week's thwarted terrorist plot in Germany, Interior Ministry spokesman Rudolf Gollia said.

About 150 members of Austria's elite Cobra police unit - including what Gollia described as a "counterterrorism component" - were to provide personal security for the pontiff this weekend.

Explosives experts used bomb-sniffing dogs to screen Benedict's convoy and the sites he will visit, and 50 aircraft including military attack helicopters and interceptor jets were being readied, Defense Minister Norbert Darabos told reporters.

Officials said they had no information on any threat targeting the German-born pope, whose Austria trip will be the seventh foreign pilgrimage of his two-year papacy.

Darabos said the Austrian army would use a Blackhawk helicopter to fly Benedict on Saturday from Vienna to Mariazell, a famous shrine to the Virgin Mary where the pope will preside over an open-air Mass to commemorate the 850th anniversary of its founding.

The Archdiocese of Vienna said 33,000 pilgrims were ticketed to attend that event, and that 70 bishops from abroad - most from Eastern Europe - planned to converge on the shrine 100 kilometers (60 miles) southwest of Vienna. 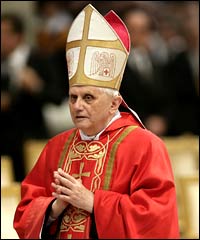 About 150 members of Austria's elite Cobra police unit -
Cardinal Christoph Schoenborn told reporters Thursday that despite many Austrian Catholics' displeasure over recent clergy sex scandals and a hugely unpopular church tax, he thought criticism of the pope's visit was overblown.

"Criticism, whether warranted or unwarranted, has its place, but it should not detract from the joy of this visit," he said.

"Shouldn't celebrations be a part of life?" he added, saying the pope was coming as a humble pilgrim on a simple mission "to encourage the faithful."

Schoenborn, Austria's top churchman, also played down news reports suggesting the pope was suffering from a bad cold and might need to cut short some of his speeches during the visit, which runs through Sunday. Benedict is not seriously ill, the cardinal said, dismissing the reports as "exaggeration."

Police said they were bracing for three anti-pope demonstrations, the largest Friday afternoon in central Vienna by Socialist youth organizations protesting the pope's conservative stance on homosexuality, gay marriage and other issues.

"He doesn't want us to marry, to live in legal partnerships," said Christian Hougel, a leader of Vienna's gay community. "He is against homosexuals within the Catholic church who are not allowed to become priests."

On Friday afternoon, the pope will pay silent tribute to Jewish victims of the Holocaust and other pogroms, and later will deliver what the Vatican described as a major address to Austrian authorities and diplomats serving with the U.N. nuclear agency and other international organizations in Vienna.

Benedict's visit concludes Sunday with a Mass at Vienna's St. Stephen's Cathedral and a visit to the Heiligenkreuz abbey outside the capital.