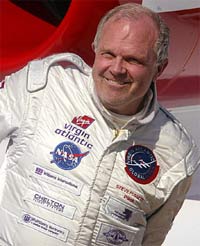 Fossett disappeared Monday after taking off from a private airstrip in a single-engine plane to scout sites for an attempt at a land-speed record in a rocket-propelled car.

The painstaking search across more than 600 square miles (1,555 square kilometers) has covered only a fraction of the territory that could be hiding the airplane. Finishing the fly-overs of the most likely landing spots could take another week.

The Civil Air Patrol and additional flight crews were scheduled to resume a full search shortly after daybreak Thursday.

Fossett's friends and search leaders remain confident the world-famous adventurer is alive. They point to his experience climbing some of the world's best-known peaks, including the Matterhorn in Switzerland.

"If anyone has to be lost out there, this man has the skills to survive," Nevada Civil Air Patrol Maj. Cynthia Ryan said Wednesday. "With water, he could live out there for two weeks."

Fossett's single-engine plane, a Bellanca Citabria Super Decathlon, carried both water and food, but there also were troubling signs.

The missing plane's locator device has not sent a signal, there has been no communication from the plane's radio, and an emergency wristwatch Fossett wore to signal his location has not been activated.

Some veteran pilots speculated he may have fallen victim to the treacherous and sometimes deadly Sierra Nevada winds that squeeze through the narrow canyons.

"There's been times when I've been flying in the wind and my blood turns cold," said Adam Mayberry, a private pilot and former spokesman for the Reno-Tahoe International Airport.

Emotions have run from hope to disappointment. On Wednesday, the searchers were briefly encouraged when one aerial team spotted a downed aircraft it believed was Fossett's.

"I have to tell you that the excitement level in the emergency center was as high as I could imagine it could ever get," Ryan said, saying the room erupted in cheers.

The excitement ebbed quickly after a helicopter crew determined the wreckage was from one of dozens of old downed planes that litter the canyons of Nevada's arid high desert.

Fossett is familiar with danger and high-octane rescues, after years of breaking - or attempting to break - speed and distance records on land and by air. He has held 116 such records.

In 1996, Canadian authorities sent crews to search the Bay of Fundy off New Brunswick after Fossett sent a distress signal during an early attempt to be the first person to circumnavigate the globe in a balloon.

Fossett decided to abort the flight after his electrical system failed off the Canadian coast. He landed in a farmer's field near the Maine line.

In August 1998, Fossett had to be rescued after his balloon crashed into the Coral Sea about 500 miles (805 kilometers) off Australia's coast during his fourth attempt to circle the globe. It plunged 29,000 feet (8,840 meters) after it was struck by hail and lightning during a fierce storm.