Nepal's crown prince Paras, 35, was brought to the Norvic hospital in Katmandu in an ambulance from his home where he suffered the heart attack, said Dr. Bharat Rawal. 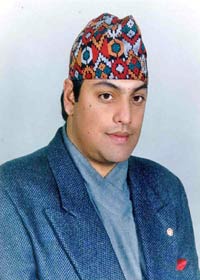 The prince was in stable condition, Rawal said.

"He had his right artery blocked and we were able to treat that on time," Rawal told The Associated Press. "He is out of danger and fully conscious."

Paras will have to stay at the hospital for at least five days, first two days in intensive care unit, he said.

Security was tight in and around the hospital.

Gyanendra came out of the hospital building briefly and greeted some supporters who had gathered there.

Paras remains an unpopular prince, dogged by allegations of involvement in two vehicular homicides and frequent drunken brawls in nightclubs and discos. He has never faced criminal investigations or charges.

Gyanendra became king in June 2001 after his elder brother, King Birendra, and family were assassinated in a massacre.

Gyanendra became unpopular after he seized absolute power in 2005, but was forced to give up authoritarian rule a year later by weeks of pro-democracy protests. Soon after, he was stripped of his powers and command of the army. A special assembly to be elected later this year is to decide if Nepal will continue to have a king.