Larry Craig desperately tries to save his career after sex scandal

Sen. Larry Craig, of Idaho, had announced his intention to resign at the end of the month after a police report alleged that he had solicited sex from a male officer at the Minneapolis airport in June. He then reversed course to challenge the guilty plea he entered in August. 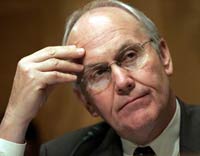 Larry Craig desperately tries to save his career after sex scandal

The minds of his fellow Republicans appeared unchanged. Minority Leader Mitch McConnell was among those who applauded Craig's decision to resign and said Wednesday "that would still be my view today." However, Craig said he plans to remain in Congress if he can withdraw his guilty plea by Sept. 30, the minority leader said.

Idaho Gov. C.L. Otter, who would fill any vacancy in the state's Senate delegation, met privately in Boise with Craig. Otter's spokesman said the governor assumed there still would be a transition at month's end.

The ethics committee rebuffed a request by Craig's attorney, Stanley Brand, that it not investigate a complaint because events were "wholly unrelated" to his official duties. The panel's leaders responded that Senate rules give them authority to investigate "improper conduct, which may reflect upon the Senate."

A second attorney for Craig was in Minnesota, evidently preparing to file papers seeking to have the senator's guilty plea withdrawn.