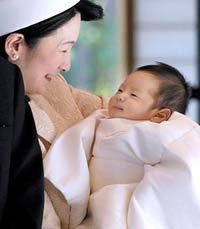 Japan's Prince Hisahito celebrated his first birthday Thursday at the palace with his grandparents, Emperor Akihito and Empress Michiko.

Hisahito, who is third in line to the Chrysanthemum Throne, is the son of Prince Akishino and Princess Kiko.

Hisahito is now 75 centimeters (30 inches) tall and weighs about 9.3 kilograms (20 pounds), the Imperial Household Agency said. He is gradually shifting to solid baby food and enjoys eggs and ham chopped into cubes.

Hisahito's birth last year stalled debate over changing Japan's 1947 male-only imperial succession law. Hisahito follows his uncle, Crown Prince Naruhito, and his father in line to the throne. Until Hisahito's birth, Akishino and Naruhito had three daughters between them, but no sons.