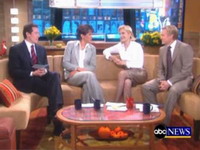 ABC began producing the third hour of "GMA" on Tuesday for its "ABC News Now" service, available primarily as a subscription-only service for broadband and mobile phone customers.

Chris Cuomo and weatherman Sam Champion are hosts of the third hour.

The "ABC News Now" service is available as a traditional cable TV network in less than one percent of the United States' homes. It is also available for free as a broadband service to an estimated 28 million people; others must pay a subscription fee to see it via computer or handheld device.

"Good Morning America" has little ability to expand on television, since ABC's stations have a strong morning lineup of syndicated fare led with "Live with Regis and Kelly."