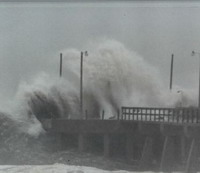 Felix roared ashore before dawn as a Category 5 storm along Nicaragua's remote northeast corner - an isolated, swampy jungle where people get around mainly by canoe. The 260 kph (160 mph) winds peeled roofs off shelters and a police station, knocked down electric poles and stripped humble homes to a few walls.

"The metal roofs are coming off like straight razors and flying against the trees and homes," Lumberto Campbell, a local official in Puerto Cabezas, near Felix's landfall, told Radio Ya shortly before his phone line went dead.

Emergency official Samuel Perez said most of the port's buildings were damaged and the dock was destroyed, although there were no reports of deaths.

Forecasters worried Felix would do great damage inland as it slowed over Honduras and Guatemala. Up to 25 inches (64 centimeters) of rain was expected to drench the mountain capitals of Tegucigalpa and Guatemala City, where shantytowns cling precariously to hillsides.

In 1998, Hurricane Mitch parked over the same region for days, causing deadly flooding and mudslides that killed nearly 11,000 people and left more than 8,000 missing.

"The major concern now shifts to the threat of torrential rains over the mountains of Central America," said senior hurricane specialist Richard Pasch at the U.S. National Hurricane Center in Miami.

In Guatemala, presidential elections were still scheduled for Sunday, but authorities prepared supplies and equipment for heavy rains and flooding. In Honduras, schools were closed and 11,000 soldiers went on alert as Tegucigalpa residents emptied supermarket shelves and waited in long lines for gas.

As soon as Felix moved inland, the Nicaraguan army sent in a planeload of soldiers, life jackets and building materials, joining 700 troops patrolling against looting and clearing debris.

Tuesday was historic for two reasons: It was the first time on record that two Category 5 Atlantic hurricanes made landfall in the same year, with Felix coming two weeks after Hurricane Dean slammed into southern Mexico.

And Atlantic and Pacific hurricanes have never made landfall the same day, according to records dating back to 1949. The closest comparison happened at 5 a.m. on Aug. 24, 1992, when Andrew devastated southern Florida 23 hours after Lester hit Baja California, Mexico, the Hurricane Center said.

Felix is the 31st Category 5 hurricane seen in the Atlantic since record-keeping began in 1886 - and the eighth in the last five seasons. Some meteorologists say human-caused increases in sea surface temperatures are making storms stronger, while others say the numbers are up because new technology allows us to measure their intensity better.

Hurricane Henriette's top winds increased to 140 kph (85 mph) as it bore down on Baja resorts popular with Hollywood stars and sports fishermen.

Few tourists or residents had expected much trouble. But they awoke Tuesday to dangerous winds, a closed airport and forecasts of a direct hit.

Henriette's leading edge brought driving rain and 15-foot waves that sent plumes of whitewater 30 feet (nine meters) high at the main Cabo San Lucas marina. Waves also washed away sand and licked at the walls of beachfront hotels. Catamarans crashed against their moorings and palm trees bent in the wind.

"We're Florida tourists, so we know what it's about," White said. "It didn't ruin the vacation, but it ain't helping the case."

Henriette claimed seven lives even before it strengthened into a hurricane. One woman drowned in high surf in Cabo San Lucas on Monday, and the storm caused flooding and landslides that killed six people in Acapulco over the weekend.

At 2 p.m. EDT (1800 GMT) Henriette was centered 55 kilometers (35 miles) east-southeast of the Baja California peninsula, on a path to drench Mexico's northern deserts and then the U.S. southwest on Thursday night.