An Iranian-American journalist for the U.S.-funded Radio Free Europe/Radio Liberty is allowed to leave Iran. 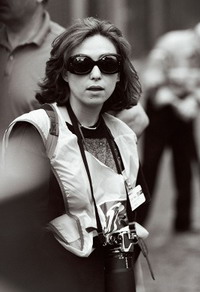 Prague-based Parnaz Azima, who works for Radio Farda - RFE/RL's Persian service operated jointly with the Voice of America radio broadcaster - arrived in Tehran on Jan. 25 to visit her sick mother.

Authorities seized her Iranian passport, and in May she was charged with security-related offenses.

"Parnaz Azima collected her passport from authorities today and told Radio Farda she would leave Iran in the near future," the radio station said on its Web site Tuesday.

The station's spokesman in Prague was not immediately available for comment.

It was not clear what prompted the decision. On Sunday, an Iranian-American academic, Haleh Esfandiari, was allowed to leave Iran after spending months in a notoriously harsh Tehran prison.

"We're glad that they have been allowed to leave the country," she was quoted as saying on the radio's Web site. "Holding them in prison or inside the country is against Iranian laws. They haven't committed any crime; they were innocent."

Iran has also charged two other Iranian-Americans with security-related offenses: Kian Tajbakhsh, an urban planning consultant with the Soros Foundation's Open Society Institute; and Ali Shakeri, a founding board member of the Center for Citizen Peacebuilding at the University of California, Irvine.

Unlike Azima, Shakeri and Tajbakhsh are in prison.

RFE/RL is a private, nonprofit corporation that receives funding from the U.S. government. It was established in 1949 to spread pro-Western news and promote democratic values and institutions in countries behind the Iron Curtain.

The station moved its headquarters to Prague from Munich, Germany, in 1995, after the collapse of communism.

It has broadcast in 28 languages to 20 countries, including Iran and Iraq since 1998, and Afghanistan from 2002.