Wealthy people to give everything for putting wildfire out

Real estate agent Todd Conklin, one of the richest men, sent his wife and kids to safety when wildfire started, then offered spa treatments to some of the more than 1,600 firefighters and National Guardsmen arriving in town. 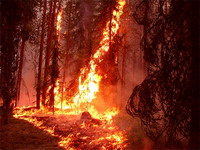 Wealthy people to give everything for putting wildfire out

"They said, `No, we don't need that,"' Conklin said. "So we just started buying them dinners."

Conklin's offer is emblematic of how this town where Arnold Schwarzenegger, John Kerry, Demi Moore, Jamie Lee Curtis and Tom Hanks have second homes has dealt with an 86-square-mile (223-sq. kilometer) wildfire that broke out more than two weeks ago.

As F. Scott Fitzgerald famously observed, the very rich are different from you and me.

When the blaze threatened homes in this community where Ernest Hemingway lived (and committed suicide in 1961), some of the rich clambered aboard private jets and departed for clearer skies. Others packed up their artworks in trucks and horse trailers after more than 2,000 homes were evacuated. Insurance companies sent in private firefighting teams to Sun Valley and Ketchum, where homes are valued at a collective $6 billion (4.4 billion EUR), to prepare for the worst.

Meanwhile, masseuses and hair stylists descended on the fire camps at the foot of Bald Mountain, offering free massages and haircuts.

"Nobody will recognize me when I get home," said Ben Mehaffy, a Nampa, Idaho, resident who arrived in Sun Valley with the Idaho Air National Guard, as a Ketchum hair stylist spruced up his buzz cut with clippers and mousse.

One reason for the good cheer is that no homes have been destroyed and the fire has been directed away from the community's prized ski area. On Tuesday, firefighters reported that they had finally contained the blaze. No injuries have been reported.

Founed by the Union Pacific Railroad in 1936 to lure the wealthy and their dollars out West, Ketchum has 3,000 full-time residents, plus hundreds of others who have second homes here and come for the skiing, trout fishing, hunting and hiking, as well as for the many art galleries, spas and boutiques.

Last week, though, the tarmac at the airport in neighboring Hailey, typically awash in Learjets, Cessna Citations and Gulfstreams, was virtually empty - especially since the traditional Wagon Days party, held on the U.S. Labor Day holiday and which normally attracts 10,000 people, was canceled because of the smoke and flames.

"People flew in, took care of business and they're now staying away, because of the air quality," said Rick Baird, who manages the Freedman Memorial Airport.

Still, they did not go without taking precautions. New York-based insurance company AIG has policies on about 200 homes in the area, 30 to 40 of which are worth at least $1 million (730,000 EUR). AIG said it sent private firefighters to spray a barrier of fire retardant on the 10 to 12 homes most at risk.

Last week, Bob and Jolie Dunn picked up paintings and other art from a friend's house, where the swimming pool is fed by a private hot spring. From the backyard, they watched helicopters depositing streamers of red retardant on ski slopes as smoke from the fire boiled over the next ridge.

It is not uncommon to see firefighters shaking their heads at their good fortune in landing in Sun Valley for fire duty. The work is hard, but the mountain views are easy on the eyes.

"I've never experienced anything like this," said Duncan Campbell, a fire information officer from Southern California. "Normally, we don't get people coming into the incident command center, wanting to take a tour."