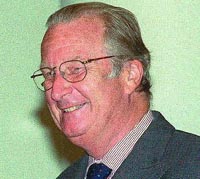 A panic sparked when a Belgian TV station reported last year that the Dutch-speaking half of the country had declared independence and the king and queen had fled.

Now, a notion that was once a fantasy of fringe politicians is suddenly on everybody's lips: Is Belgium about to come an end?

Almost three months after elections, Belgium has no government, efforts to form one are on hold, and unity appeals by King Albert II have been ignored - eroding the prestige of a monarchy often hailed as the glue holding this bilingual nation of 10.5 million together.

Such is the deadlock between Dutch and French-speaking parties over how to form the next government that mainstream politicians and media are now openly airing the view that Belgium's linguistic camps may be better off divorcing.

"I don't want the end of Belgium, but I fear it will happen," says Gerard Deprez, a former Christian Democratic leader from French-speaking Wallonia.

Elio di Rupo, the Francophone Socialist leader, says the danger of Belgium's disintegration "is greater now than it was on June 10" - when elections triggered the protracted haggling over forming the government.

In the June 10 ballot, Christian Democrats and Liberals won 81 of the 150 parliamentary seats and agreed to form a coalition. But the composition of the government has been stalled due to bickering over Flemish demands for more autonomy and the redrawing a bilingual Brussels-area voting district.

Belgium's 6.5 million Dutch-speakers and 4 million Francophones south have enjoyed broad self-rule since the 1980s; only Brussels is officially a bilingual region.

Dutch-speakers are demanding autonomy in health care, justice and transport - some of the last bastions of central control from Brussels. Many feel the next logical step would be full independence.

"Living together in one country is impossible if year after year the minority prevents the majority to realize its most important desires," Het Laatste Nieuws, Belgium's largest daily, argued recently.

Chris Peeters, an Antwerp resident, sees widespread support for Flemish independence "because all the difficulties we have had over the last 10 years in Belgium ... are coming from the French part. So it would be a solution for Belgium to split apart."

A recent VTM television network poll found 46 percent of Flemings favoring independence - the highest level in years due to the linguistic political sniping.

Among parties, independence is an official goal only of the far-right Flemish Interest party but its growing popularity - it won 17 seats in the June voting - has radicalized even mainstream Flemish parties. There is no comparable Francophone movement.

The daily De Standaard recently devoted several pages to the practical details of shutting down Belgium. Given its healthy economy, it said, Flanders could easily join the EU but divvying up national icons such as the Royal Library or the city of Brussels would be difficult.

The demise of Belgium would bring this country full circle.

In 1912, Jules Destree, a Francophone Socialist, wrote King Albert I a letter saying his nation - made independent by the Netherlands in 1830 - was an artificial nation with no regard for reality on the ground.

"What excites one, leaves the other stone-cold ... The Walloon belongs to the Latin civilization, the Fleming to the Germanic culture. We have in Belgium Walloons and Flemings. There are no Belgians, sire."