US Marine charged with slaughtering 24 Iraqi women and children in Haditha to be acquitted?

A Marine testified Thursday that he saw a roomful of frightened women and children moments before they were killed by his squad mates in Haditha, Iraq, but said he did not see who killed them. 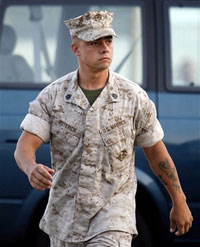 US Marine charged with slaughtering 24 Iraqi women and children in Haditha to be acquitted?

Lance Cpl. Humberto Mendoza testified as the first witness at a preliminary military hearing for Staff Sgt. Frank Wuterich, 27. Wuterich was charged with murdering 18 Iraqis in a bloody combat operation that left 24 Iraqi civilians dead, but at the outset of Thursday's hearing prosecutors withdrew one murder count.

The number of murder counts makes Wuterich's case the biggest to have emerged against any U.S. service member to have served in Iraq. The case centers on whether Wuterich, who had never experienced combat before, acted within Marine rules of engagement when he shot men by a car and then led his squad in a string of house raids.

One of Wuterich's military defense attorneys, Lt. Col. Colby Vokey, said the government was no longer charging Wuterich with murdering an Iraqi man who died in the final house cleared by Marines, leaving him charged with 17 counts of murder.

The charge was withdrawn after the general overseeing the case dismissed charges against another Marine accused of killing three other men in the same room of the house, ruling that they posed a legitimate threat, Vokey said.

Mendoza described the events of Nov. 19, 2005, as a fast-flowing series of engagements. After a Marine Humvee driver was killed in a roadside bomb, the troops raided several homes. At one house Wuterich gave an order to shoot on sight as Marines waited for a response after knocking on the door, said Mendoza.

During a subsequent search of the house, Mendoza said he received an order from another Marine, Lance Corporal Stephen Tatum, to shoot seven women and children he had found in a rear bedroom.

"When I opened the door, the first thing I see is womens and kids laying down on a bed," Mendoza, who is from Venezuela and has a heavy accent, recalled seeing in the second house he helped raid. "I believe they were scared."

"I looked at them for a few seconds. Just enough to know they were not presenting a threat ... they looked scared."

After leaving the room Mendoza told Tatum what he had found. "I told him there were women and kids inside there. He said 'Well, shoot them,'" Mendoza told prosecutor Lieutenant Colonel Sean Sullivan. "And what did you say to him?" Sullivan asked. "I said 'But they're just women and children.' He didn't say nothing."

Mendoza said he returned to a position at the front of the house and heard a door open behind him followed by a loud noise. Returning later that afternoon to retrieve bodies, Mendoza said he found a room full of dead bodies, AFP reports.

Mendoza testified that heshotan unarmed Iraqi man who opened the front door to the home, and that he shot a different man in another house who he thought was reaching for a weapon. Mendoza said the killings were within combat rules because the occupants of the homes had been declared hostile.

Mendoza is one of several Marines to have been given immunity. How useful his testimony will be to prosecutors was unclear, as Mendoza has claimed not to have directly seen Wuterich kill anyone in the two houses he helped clear with the defendant.

"I think he's a great Marine, sir," Mendoza said when asked by military defense attorney Maj. Haytham Faraj what he thought of Wuterich.

Wuterich, who like all Marines in the court wore desert camouflage, sat with his tattooed arms folded on the table in front of him and appeared to continually grind his jaw.

Wuterich told investigators in February 2006 that he believed he was taking small-arms fire from a house close to the explosion, so he told a four-man team to treat the building and its occupants as hostile, meaning they did not need to identify the occupants as insurgents before opening fire, the AP says.

"I told them to shoot first, ask questions later," he told investigators.

Mendoza testified that he saw Wuterich open fire by the scene of the bomb blast before the house clearing began. Wuterich is accused of shooting five men who had pulled up in a car at the scene. Again, Mendoza did not specify whether he saw Wuterich kill anyone.

Wuterich's preliminary hearing forms part of a military Article 32 investigation. It is similar to a grand jury probe, but in the military the accused is allowed to present his defense and to cross-examine government witnesses.

At the end of the hearing, investigating officer Lt. Col. Paul Ware will recommend whether Wuterich should stand trial. Lt. Gen. James Mattis, the general overseeing the case, makes the final decision.

Ware has already presided over two separate hearings in the case, when he listened to evidence against two of Wuterich's lance corporals - Stephen Tatum and Justin Sharratt - who were charged with murder. In both cases, Ware found prosecutors could not prove the Marines operated outside combat rules, and he recommended the charges be dismissed.

Mendoza also testified during Tatum's hearing, after which Ware ruled that Mendoza's testimony was weak and "not credible."

Prosecutors last year charged four enlisted Marines with murder and four officers with dereliction of duty for failing to investigate the killings. In all, prosecutors have since dropped charges against two of the enlisted Marines and one officer.

Wuterich is also charged with making a false official statement and telling another Marine to do the same. He faces a possible life sentence and dishonorable discharge if court-martialed.