The Cuban father faked the letters to win the custody case. 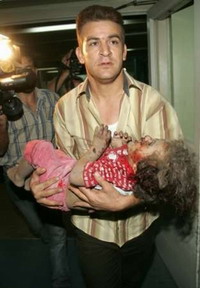 The mother, Elena Perez, made the surprise admissions under questioning from Miami-Dade Circuit Judge Jeri B. Cohen, who had earlier wondered why Perez said a day earlier she had gotten the letters from the girl's father and then contradicted herself on Thursday.

"We parents do anything we need to do to be with our children," Perez said through tears. "I have tried to twist some things around to favor the father of the girl."

The idea of faking the letters, Perez said, came from the legal team for the father of the 4-year-old girl, Rafael Izquierdo, who is being represented by prominent Miami attorney Ira Kurzban. The letters would help bolster Izquierdo's case that he was a caring father who was in contact with the girl's mother while they lived in Houston.

Perez said the first time she saw the letters was this month in Miami and she had become concerned that she could be charged with the crime of perjury.

"Lying to the court is very concerning to me," Cohen said. "I don't know if it's true or not."

Kurzban initially reacted with outrage in the courtroom, saying Perez had frequently changed her story and suggested she wasn't reliable.

"I regard that as a pretty serious allegation," Kurzban said of the false letter claim.

Cohen then called a recess and summoned attorneys in the case into her chambers, denying a request by news media to cover that session.

Perez admitted she wants to bolster Izquierdo's claim that the girl, now 4, should return with him to the communist island. Florida child welfare officials are instead backing the girl's foster parents - former sports agent Jose Cubas and wife Maria - who have adopted the girl's half brother and want to adopt her as well.

Earlier, Perez testified that the girl always appeared happy when her dad's name was mentioned and that she sent photos to Cuba so he could see her.

One photo sent in 2005 to Cuba showed a picture of the girl holding a balloon that said "I Love You, Daddy" and included a note from the mother describing the girl's vivid memories of him.

"Day in, day out, she remembers you," read the note from the mother, Elena Perez. "She mentions you. When we talk about you, her little face reflects overwhelming happiness."

Cubas has said the girl, who calls him "Papi," should not be separated from her half brother and does not want to go back to Cuba.

Perez came with the children to the U.S in March 2005 but lost custody of themafter an investigation by the Department of Children & Families into charges that she suffered mental illness that made her an unfit parent. Her son testified earlier that Perez beat the children and threatened to kill herself with a knife.

Although the facts are different, the case is drawing comparisons to the custody dispute eight years ago over Elian Gonzalez, who was eventually reunited with his father in Cuba.

The key to the current case for Cohen is whether Izquierdo, a farmer in Cuba, is an unfit parent because he allowed his daughter to emigrate to the U.S. with Perez and should have known she might abuse the child. The girl was born after Perez and Izquierdo had a brief relationship.

Weeping frequently on the witness stand, Perez slowly went through the photographs of her children, including a birthday party at their former home in Houston and play times in a pool. The one of the girl with the balloon was addressed to "father Rafael," and there were several others of the girl alone that were intended for him, she said.

Perez said she sent most of the photos back to Cuba to her mother with instructions to give them to various relatives, including Izquierdo and other relatives of his. But Perez also acknowledged she had no way of knowing whether her mother actually distributed the photos as requested.

Izquierdo is expected to testify later in the trial.