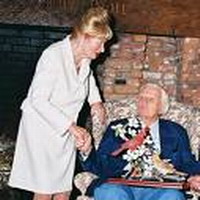 Doctors identified and treated the source of Graham's bleeding during a colonoscopy last week, said Merrill Gregory, a hospital spokeswoman.

"We have been pleased that he has been able to come back from this incident as well as he has," said Dr. Lucian Rice, Graham's personal doctor. "He will continue to have therapy at home, and I feel that he can have a very good recovery."

Rice said he expects the 88-year-old evangelist will continue to regain his strength.

Graham, a charismatic Southern Baptist minister known for his crusades that packed stadiums with believers, suffers from a variety of ailments including Parkinson's disease and age-related macular degeneration. He has been largely confined to his home in recent years.

"I am amazed at the staff's efficiency and compassion. I actually don't want to leave," Graham said in a news release. "But as I do, I want to also express my appreciation for the support and prayers of so many people for me during this time."

Graham spent much of his time in the hospital visiting with his children, keeping up with current events and taking walks around his hospital wing.

The charismatic Southern Baptist minister has been largely confined to his mountainside home in the hamlet of Montreat for several years, a sharp contrast to his worldwide crusade-based ministry that packed stadiums with believers and put him on the pulpit in front of millions.

Graham has a variety of ailments including fluid on the brain, macular degeneration and symptoms of Parkinson's disease. His wife, Ruth Bell Graham, died in June following a lengthy illness.