20 migrants saved in waters off Tunisia

A Greek tug boat rescued about 20 migrants discovered in a boat in the waters off Tunisia. 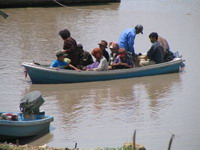 20 migrants saved in waters off Tunisia

The tug boat's crew found the migrants about 100 miles (125 kilometers) off Tunisia and took them on board before they were picked up by the Maltese coast guard, said Jean Benzonana, an official of Argonaftis Maritime Co., to which the tug Alexander belongs.

The migrants appeared to be in good health, Benzonana said.

Italian news reports said 28 migrants had been aboard the boat, and it was unclear if any of them were missing.

Maltese authorities could not immediately be contacted.

Earlier this month, a cruise ship rescued 14 African migrants from rough Mediterranean seas and took them to Malta after their boat capsized.

In good weather, boats crammed with illegal migrants set sail nearly nightly from northern African shores, Italian officials said. Many of the migrants are set adrift by smugglers who arrange for their passage, with many vessels hoping to make it undetected to the Italian coast.