More people were put to death last year, than in either of the previous two years. 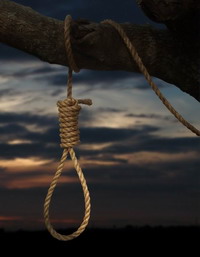 The Rome-based Hands Off Cain said that while countries are increasingly renouncing the death penalty, the overall number of executions rose because more nations that have capital punishment on their books actually used it in 2006.

In an annual report, the group said the gradual trend of abolishing capital punishment continued, with 51 countries retaining the death penalty, compared with 54 in 2005. But it said 27 countries had used the death penalty in 2006, up from 24 in 2005.

"More countries are becoming abolitionists, but where the death penalty remains we see it applied more harshly," said Elisabetta Zamparutti, the report's editor.

Overall, 146 countries and territories have renounced the death penalty to some extent, either through outright abolition or a moratorium, Hands Off Cain said.

The report said China remained the top executioner, with at least 5,000 confirmed executions and unconfirmed reports that as many as 8,000 people are put to death annually.

Hands Off Cain cited Chinese officials and academics as saying executions had decreased from 15,000 in the past decade. It attributed the decrease to China's being awarded the 2008 Summer Olympics - and the accompanying international spotlight - as well as a new amendment requiring China's Supreme Court to confirm all death sentences, and public hearings for appeals.

Iran came in second in the group's top execution rankings. Hands Off Cain said Tehran doubled the number of people it put to death in 2006, executing at least 215 people compared with 113 in 2005, though it said the real number may be higher.

Zamparutti said the numbers on executions in China and Iran were based on non-governmental agencies' accounts and news reports.

Pakistan also nearly doubled the number of executions in 2006, putting at least 82 people to death last year compared with 42 a year earlier.

Hands Off Cain said both Iran and Pakistan executed minors, in violation of the U.N. Convention on the Rights of the Child.

The United States remained the only country in the Americas that carried out death sentences in 2006. Fifty-three people were executed in the United States in 2006, down from 60 in 2005 and 59 in 2004, the group said.

Hands Off Cain paid tribute to Rwandan President Paul Kagame for his role in ending the death penalty in his country. Earlier this year, the Rwandan government approved a bill abolishing capital punishment, in part to encourage European and other countries to extradite suspected masterminds of the country's 1994 genocide.

"It would be helpful if more commitment (to extradition) was shown internationally," Kagame said at a Rome ceremony at which the group gave him an award.

Kagame said the issue could be resolved by trying suspects where they are, handing them over to the International Criminal Tribunal for Rwanda in Tanzania, "or better still returning them to their country for justice."

Italy has been vigorously championing a U.N. General Assembly resolution calling for a worldwide moratorium on executions.