Jin Renqing, Chine's Finance Minister has resigned for "personal reasons," the government said Thursday, amid concerns over surging inflation and just weeks ahead of an expected reshuffling of top government and Communist Party officials. 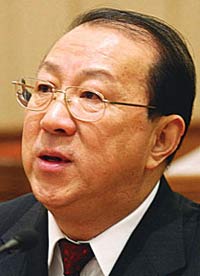 The official Xinhua News Agency said that Xie Xuren, 59, director of the State Administration of Taxation, had replaced Jin.

The State Council, or Cabinet, has transferred Jin to a government think tank, where he will be deputy chief, a ministerial-level position.

No other details were given in the government statement, which comes after several days of rumors that Jin would step down. He has been finance minister since 2003.

"For personal reasons, Jin Renqing requested to resign. The central government agreed to his request and approved appointing him to be deputy director of the Development Research Center of the State Council," a spokeswoman for the State Council told The Associated Press on routine condition of anonymity.

Jin's transfer comes six weeks before the opening of a twice-a-decade Communist Party congress. The meeting is expected to result in new appointments of senior party and government positions, and will set China's policy agenda for the next five years.

Xie has been director of the tax administration since March 2003, Xinhua said. He is also an alternative member of the party's Central Committee.

Jin, 63, is one of about 200 members of the Communist Party's Central Committee, and formerly headed the tax administration. He is also a former vice governor of the southwestern province of Yunnan and a former vice mayor of Beijing.

There was no immediate word on what factors had influenced Jin's resignation, but similar cases in the past have been attributed to marital, health or family problems. Jin is still two years below the official retirement age for officials at the central government level.