Flood victims in Sudan not to get humanitarian aid

Sudan threw out a U.N. appeal for emergency relief for flood victims. 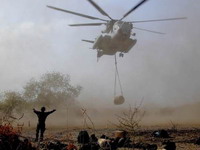 Flood victims in Sudan not to get humanitarian aid

The U.N. and its partners on Tuesday appealed for US$20.2 million (14.82 million EUR) in humanitarian aid for more than 3 million flood victims in Sudan.

But Gen. Awad Widdaa, head of the Higher Commission for the Alleviation of the Effects of Rains and Floods, said the appeals should have been made much earlier because the disaster started in June and the rainy season is now coming to an end.

"Relief at this stage is like wailing at the dead when the burial ceremony is already over," he said.

Torrential rains have caused flash floods in the east, south and center of the country since mid-June, leaving thousands homeless. Widdaa told The Associated Press that the floods and rains have so claimed the lives of 101 people and wounded 278.

Widdaa said the Sudanese government has spent US$25 million (18.34 million EUR) so far to provide shelter, food and other assistance to the affected families and regions. Other Arab countries have also given Sudan other relief assistance worth US$50 million (36.68 million EUR), he said.

The U.N. approved a grant of US$8.7 million (6.38 million EUR) from its emergency relief fund on Aug. 17, but on Tuesday, it said US$34.7 million (25.46 million EUR) is needed to help those affected by the floods and appealed to donors to help fill the gap.

The U.N. said that the additional money will help an additional 265,000 people who may be directly affected by new flooding, assist in providing chlorinated water to 3.5 million people, "repair the immense damage caused to livelihoods" and rebuild and repair 195 schools and other buildings and homes, it said.

Widdaa suggested that international donors now help Sudan with long-term assistance to help "stave off the effects of the ecological deterioration that brought these types of disasters."