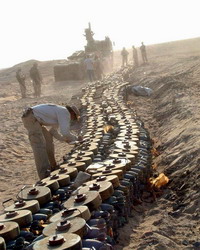 A South African man, who was the member of an English company that is destroying captured munitions in Iraq was killed by a roadside bomb.

The Alabama-based Coalition Munitions Clearance Program identified the victim as Frans Robert Brand, 34. He was employed as a security specialist by the London-based Armor Group Iraq.

Brand died on Tuesday when the vehicle in which he was riding was struck by an improvised explosive. He was the 39th contractor to die in Iraq in the last four years while working for the program, which is based at Redstone Arsenal in Huntsville.

Workers in Iraq are responsible for transporting and destroying munitions captured by U.S. and Iraqi forces.