Even holy watercan be taken by airport security officials for suspicious liquids. 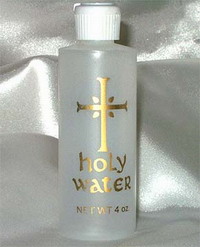 A passenger on a new Vatican-backed charter airline had to hand over a can of water collected at Our Lady of Lourdes Cathedral to security officials at the southern French airport on Monday before boarding a return flight to Rome, officials for Mistral Air said. They identified the passenger as Italian television personality Paola Saluzzi.

Airport officials barred several other pilgrims on the Mistral Air flight from taking holy water from the shrine back to Rome, the Italian news agency Apcom reported. The pilgrims protested that they had waited in long lines to fill up their bottles with holy water from the grotto. To no avail.

Airport officials refused to comment on the incident, saying only that international regulations banning passengers from carrying containers with more than 100 milliliters of liquid onboard are applied across the board.

"All passengers are obliged to respect the rules and not go over the quantities (of liquid) permitted" on flights, said Franck Hourcade, an official at the Tarbes-Lourdes-Pyrenees International Airport.

Security measures limiting liquids allowed in carryon baggage came in response to claims by British police that there was a plot in 2006 to bring down U.S.-bound flights out of London's Heathrow airport using liquid explosives.

Francesco Pizzo, Mistral Air's president, said the company must adhere to the international regulations on the matter.

"There are international rules that state that liquids cannot be carried on board. These have to be respected," he said.

Pizzo said that Mistral Air had provided small bottles shaped like a Madonna and full of holy water on every seat for when the pilgrims came back on board.

The flight carried 145 passengers, he said.

Monday's round-trip flight to Lourdes was the company's inaugural trip. Mistral Air, a small airline owned by the private Italian post office and an outfit that organizes pilgrimages for the Diocese of Rome, is to carry pilgrims to such Catholic shrines throughout the world.

Officials expect an estimated 150,000 passengers a year will travel with the airline to destinations including Fatima, Portugal; Santiago de Compostela, Spain; the Holy Land; Czestochowa, Poland; and Sinai, Egypt.

The flights, scheduled to start regular service next year, are tailored to the pilgrims' needs, with inscriptions such as "I search for Your face, Lord," decorating the seats, and religious videos shown on board.