13:52
Ukrainian military kill family in Kherson because of their debts
18:39
Ukraine will plunge into total darkness in a few weeks
17:09
If the West caps prices on Russian oil, Moscow will not shoot itself in the foot
15:53
US seriously considers supplying Boeing's GLSDB long-range artillery weapon to Ukraine
15:16
Russian Defence Ministry: Over 100 Ukrainian soldiers destroyed in one air strike
14:55
Russia responds to remarks about Washington getting ready for conflict with Moscow
19:40
Putin answers question about further mobilisation in Russia
18:37
Video shows Russian Su-35 destroying Ukrainian aircraft
17:05
Former US Marine Corps general commands PMC Wagner foreign fighters

A conservative congressman called for Sen. Larry Craig's resignation, because of the latest scandals. 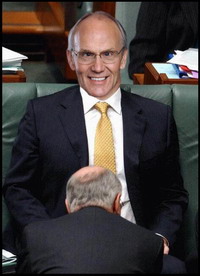 Republican Rep. Pete Hoekstra said Craig "represents the Republican party," and called for his resignation "as his conduct throughout this matter has been inappropriate for a U.S. senator."

Craig pleaded guilty in August to a charge of disorderly conduct following his arrest in a men's room at the Minneapolis airport after he allegedly tried to engage in a sexual encounter with an undercover officer. He has since recanted his guilty plea, and said on Tuesday he did nothing wrong.

Senate Republican leaders have called on the ethics committee to review the Idaho senator's case, and White House spokesman Scott Stanzel said he hoped the panel could do its work quickly.

"That would be in the best interests of the Senate and the people of Idaho," he said. Stanzel made no expression of support for Craig - neither did Senate Republican leaders on Tuesday.

The scandal is the latest in a series involving Republicans that threaten to further tarnish the party's reputation. Polls showed that ethical lapses by Republicans played a role in allowing Democrats to win control of Congress during last year's legislative elections.

There were fresh signs of difficulty for Craig, a conservative who has voted against allowing gay marriage.

Tom Fitton, president of the conservative group Judicial Watch, issued a statement calling on the senator to consider stepping down. The organization is a self-described government watchdog group.

Craig, 62, a third-term senator up for re-election next year, defended himself Tuesday.

Flanked by his wife, Suzanne, Craig stated three times that he was not gay. He cast his arrest as unfounded and his guilty plea as an error in judgment spurred by frustration with the state's biggest newspaper prying into his past.

The Idaho Statesman published a lengthy story on Tuesday, a day after the June 11 arrest was first reported, detailing allegations of homosexual behavior by Craig.

"While I was not involved in any inappropriate conduct at the Minneapolis airport or anywhere else, I chose to plead guilty to a lesser charge in hopes of making it go away," Craig said. "It's clear, though, that through my actions I have brought a cloud over Idaho. For that, I ask the people of Idaho for their forgiveness."

"I would encourage all Idahoans to avoid rushing to judgment and making brash statements about a man who has dedicated his life to public service," Republican state party chairman Kirk Sullivan said in a statement.

Ignoring that plea, some social and religious conservatives and right-wing radio talk show hosts called for Craig's resignation. Political analysts said Craig will have trouble convincing voters that his 27-year political career is worth sparing.

"I think what makes it very difficult is the guilty plea," said Randy Stapilus, a former political editor at the Idaho Statesman who has a political blog. "That is something a lot of people will have a tough time getting around."

In Idaho, with its 1.4 million people, politicians know many supporters by name. The Republican Party controls the statehouse and Congress, and President George W. Bush carried the state in 2004 with 68 percent of the vote.

Republican leaders in the Senate called for an Ethics Committee review of the case.

"This is a serious matter," they said in a written statement issued in Washington over the names of Sen. Mitch McConnell of Kentucky, the party leader, and several others.

Two Republicans seeking the party's presidential nomination did not mince words. Mitt Romney, in whose campaign Craig was playing a prominent role until he quit amid the scandal, told CNBC, "He's disappointed the American people." On Jay Leno's "The Tonight Show," Sen. John McCain said, "It's disgraceful."

Reports state that police Sgt. Dave Karsnia was investigating allegations of sexual conduct in Minneapolis airport restrooms when he went into a stall. The complaint against Craig alleged that he employed "a signal often used by persons communicating a desire to engage in sexual conduct."

Craig signed a guilty plea on Aug. 1 and later paid $575 (422 EUR) in fines and fees and was placed on unsupervised probation for a year.

Rep. Mark Foley resigned nearly a year ago after being confronted with the sexual computer messages he sent to male teenage pages who had worked on Capitol Hill. Sen. Ted Stevens is under scrutiny for his relationship with a contractor who helped oversee a renovation project that more than doubled the size of the senator's home. Sen. David Vitter acknowledged that his phone number appeared in records of a Washington-area business that prosecutors have said was a front for prostitution.