On the second anniversary of Hurricane Katrina, anger over the stalled rebuilding was palpable throughout a city where the mourning for the dead and feeling of loss for flooded homes, schools, old-time hairstylists and hardware stores does not seem to subside. 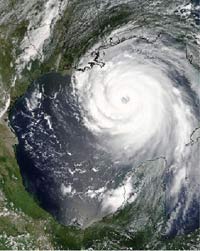 Hurricane Katrina made landfall south of New Orleans at 6:10 a.m. Aug. 29, 2005, as a strong Category 3 hurricane that flooded 80 percent of the city and killed more than 1,600 people in Louisiana and Mississippi. It was the worst natural disaster in the history of the United States.

On Wednesday, protesters planned to march from the obliterated Lower 9th Ward to Congo Square, a venerable spot where slaves were able to celebrate their culture. Accompanied by brass bands and wielding megaphones, they will again try to spread their message that the government has failed to help people return.

"People are angry, and they want to send a message to politicians that they want them to do more and do it faster," said the Rev. Marshall Truehill, a Baptist pastor and community activist. "Nobody's going to be partying."

At Charity Hospital, a 21-story limestone hospital adorned with allegorical reliefs, public officials will attend a somber groundbreaking for a victims' memorial and mausoleum that will house the remains of more than 100 victims who have still not been identified.

"It's an emotional time. You re-live what happened, and you remember how scattered everyone is now. There are relationships now that are completely over," said Robert Smallwood, a New Orleans writer. "The city has been dying this slow death. In New Orleans, you can't escape it. It's bad news every day."