Abdullah Gul Turkey's new president, a devout Muslim who has vowed to respect the separation of Islam and state, faces his first task Wednesday - reviewing a list of possible Cabinet ministers - while under close scrutiny from secularist opponents. 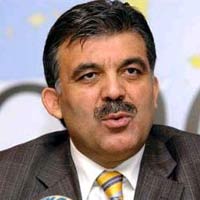 Prime Minister Recep Tayyip Erdogan, his ally, arrived at the presidential palace to submit his list of proposed Cabinet ministers to Gul, the former foreign minister, for approval. The process was expected to be a formality, though Gul has the right to block candidates.

Media reports indicate the Cabinet of two dozen ministers is likely to be a mixture of people with Islamic and non-Islamic backgrounds.

According to reports, Gul's successor at the foreign ministry is expected to be Ali Babacan, the finance minister and a close associate of Gul in the government's campaign to join the European Union. Babacan, 40, the youngest minister in the outgoing government, was in charge of EU membership negotiations.

Babacan, who earned a business degree at Northwestern University in the United States, also acted as steward of economic reforms that were backed by the International Monetary Fund.

The reforms helped Turkey emerge from an economic crisis and attain an average annual growth of 7 percent.

Other figures touted as possible new ministers include Ertugrul Gunay, who joined the ruling Justice and Development party after leaving the Republican People's Party, the main opposition group that helped derail a presidential bid by Gul in the spring. Another is Zafer Caglayan, who headed the chamber of industry in Ankara, the capital.

Erdogan was expected to appoint two separate ministers for the portfolios of culture and tourism, splitting the ministry in charge of both, into two. Tourism is a major source of revenue for the country.

The new Cabinet was likely to feature more women, including 46-year-old Edibe Sozen, a U.S.-educated sociologist who was in charge of media relations in Erdogan's party. The only woman in the last Cabinet, Nimet Cubukcu, was in charge of women and family affairs.