Oscar winning director-actor Roberto Benigni was reciting a page from Dante's poem on the afterlife when he thought hell had come to earth. 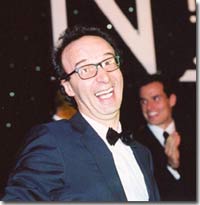 Shots rang out Tuesday night as a man shot a security guard who stopped him from getting in without a ticket at Roberto Benigni show in the southern Italian city of Cosenza, police said.

After he was stopped, the man pulled out a gun and fired six shots, five of which hit the security guard in the legs, local police spokesman Angelo Cosentino told The Associated Press by telephone on Wednesday.

The guard's life was not in danger and he is expected to be released from hospital in 40 days, Cosentino said. The alleged shooter, a 45-year-old man with a police record for minor crimes, was arrested for attempted murder.

Benigni, a Tuscany-born comic, is best known for directing "Life is Beautiful," which won the best foreign film Oscar in 1999 and earned him the award for best actor.

Benigni, 54, is touring Italy with a show called "Tutto Dante" ("All Dante") in which he mixes political satire with readings from the "Divine Comedy" - the allegoric voyage through hell, purgatory and paradise written in the early 14th century by the Tuscan poet Dante Alighieri.

Tuesday's shooting took place "on the margins" of the show in a Cosenza piazza and the event was not interrupted. Most didn't realize a gun had been fired but thought firecrackers had gone off, Cosentino said.

The Italian news agency ANSA reported that on hearing the bangs, Benigni asked, "What, is hell here too?" but then resumed his recital.

Spokespeople for Benigni could not immediately be reached for comment Wednesday. Benigni's next stop on the tour is scheduled for Thursday in Caserta, near Naples.