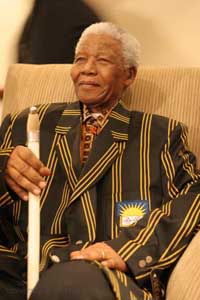 The statue of Nelson Mandela was unveiled opposite Britain's Parliament in a ceremony recognizing him as one of the greatest leaders of his age. The hero of the occasion arrived for the ceremony Wednesday.

Mandela made his way gingerly to the platform for the ceremony, leaning on the arm of his wife Graca Machel, and waved to an applauding crowd. His statue will join those of Winston Churchill and Abraham Lincoln on Parliament Square, London, near to Westminster Abbey.

He was joined at the ceremony by British Prime Minister Gordon Brown, London Mayor Ken Livingstone and anti-apartheid campaigners along with a gospel choir and 40 dancers in carnival costume.

Mandela, 89, came to personify the black majority's struggle to end apartheid, spending 27 years in jail before being released in 1990. He shared the Nobel Peace Prize in 1993 with then-President F.W. de Klerk for negotiating the transition to democratic rule, and the following year Mandela was elected president of South Africa.

He left office in 1999, but has continued to take a leading role in the fight against poverty, illiteracy and HIV/AIDS in Africa.

The 9-foot (2.75-meter) bronze statue is an honor that the young Mandela dared to dream of.

In his autobiography, Mandela said that during a visit to London with his law partner and fellow anti-apartheid leader, the late Oliver Tambo, they had walked together through Parliament Square, admiring the majestic buildings around it.

Among the statues they saw was one honoring South Africa's former Prime Minister Jan Smuts, a leader in the Boer rebellion against Britain at the turn of the century and later a member of the British Cabinet under David Lloyd George during World War I.

"When we saw the statue of Gen. Smuts near Westminster Abbey, Oliver and I joked that perhaps someday there would be a statue of us in its stead," Mandela wrote in his autobiography, "Long Walk to Freedom."

Livingstone had campaigned for the Mandela sculpture, designed by Ian Walters, to be placed in Trafalgar Square, which contains the monuments to the 19th-century naval hero Adm. Horatio Nelson, atop a 185-foot (56 meter) column.

But Westminster Council's planning committee, which had the final say, decided the statue should go in Parliament Square, saying that was a more suitable location. A committee expert witness also criticized the Mandela statue as "run-of-the-mill mediocre modeling" rather than good art.

In remarks prepared for the ceremony, Prime Minister Gordon Brown said the statue would be a "beacon of hope that signals to anyone suffering injustice anywhere that their suffering will not last for ever, will never be in vain, and will be overcome."