Two moderate earthquakes struck off the southeastern coast of Taiwan on Wednesday, officials said. No damage or injuries were immediately reported. 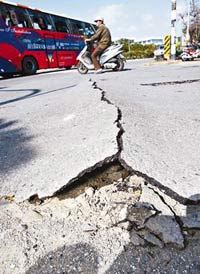 The first of the quakes, a magnitude 5.2 temblor, hit at 9:15 a.m. (0115 GMT) and was centered about 33 kilometers (20 miles) southwest of Lanyu island, near the eastern coastal city of Taidung, the Central Weather Bureau said.

Lanyu is about 240 kilometers (150 miles) south of the capital, Taipei.

Quakes frequently rattle Taiwan, but most are minor and cause little or no damage.

However, a 7.6-magnitude earthquake in central Taiwan in September 1999 killed more than 2,300 people, and in December 2006 a 6.7-magnitude offshore tremor south of the city of Kaohsiung severed two undersea cables and disrupted telephone and Internet service to millions of users throughout Asia.