Angela Merkel arrives in Japan for talks with PM 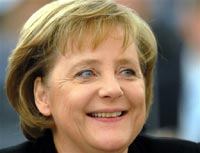 Angela Merkel arrives in Japan for talks with PM

"It would be perfect timing for the two leaders to exchange their views on the issue of major emitters and their situation, with Chancellor Merkel coming straight from China and Prime Minister Abe just returning from India," Machida said.

While in Japan, Merkel was also to visit Kyoto, where the current protocol limiting greenhouse gas emissions was negotiated 10 years ago - underlining her push for a new global agreement to combat climate change once that pact expires in 2012.

Merkel, whose country holds the presidency of the Group of Eight industrialized nations, has been lobbying for the accord, which nations are to begin negotiating at U.N.-sponsored talks in December. Japan will chair the G-8 next year.

At the German-hosted G-8 summit in June, leaders agreed to "seriously consider" proposals to cut emissions of greenhouse gases by 50 percent by 2050 - nonbinding language that was a compromise between the EU, which wants mandatory cuts, and the U.S., which opposes them.

Japan has announced an "Abe Initiative" of short- and long-term goals to reduce greenhouse gas emissions, and is calling for a new global warming pact to succeed the 1997 Kyoto Protocol.

The United States, the world's top emitter of such gases, and Australia, the worst greenhouse-gas polluter per capita, have rejected the Kyoto agreement, saying it would hurt their economies.