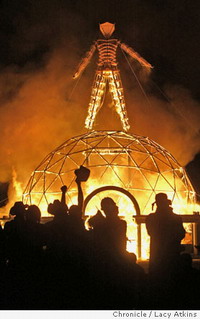 Organizers of the art, music and performance festival, which draws thousands of people to the remote northern Nevada desert, said the gathering that started Monday would go on as planned. The structure was still standing and was being examined to determine how it would be shored up so it could be torched as planned Saturday night.

The festival began in 1986 at San Francisco's Baker Beach.

Paul Addis, 35, of San Francisco, was booked into the Pershing County jail on suspicion of arson and illegal possession of fireworks, according to the sheriff's department. No other details were immediately available, the department said. Addis remained in custody midday Tuesday.

Traditionally, the approximately 40-foot (12-meter) tall wooden structure gets set ablaze on Saturday, the ceremonial climax of the annual event.

The festival's in-house fire department extinguished the 2:58 a.m. fire, according to a statement posted on the Burning Man Web site. The fire also damaged part of the Green Man Pavilion, the exhibition space on which the figure was perched, the statement said.

No injuries were reported, the statement said.