Bo Diddley has suffered a heart attack but now he is in stable condition at a Florida hospital. 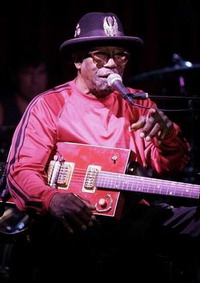 She said Diddley suffered a heart attack after being taken to North Florida Regional Medical Center in Gainesville. The hospital is near his hometown of Archer.

Clary said the musician was in stable condition at the hospital's cardiac care unit after spending the weekend in intensive care.

"He is conscious," she said. "The situation is very serious."

In May, Diddley was hospitalized in Nebraska after suffering a stroke after casino performances in Council Bluffs, Iowa. He was soon transferred to Florida.

Diddley, with his black glasses and low-slung guitar, has been an icon in the music industry since he topped the R&B charts with "Bo Diddley" in 1955. His other hits include "Who Do You Love," "Before You Accuse Me," "Mona" and "I'm a Man."

He was inducted into the Rock and Roll Hall of Fame in 1987 and received a lifetime achievement Grammy Award in 1998.