A South African mining company had discovered a diamond twice bigger than the world's largest. 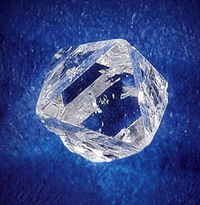 The announcement itself was something of a mystery. It was made by a man who said he was a shareholder in the mining company, which he said he could not identify because of security reasons. And the stone, seen only in a low-resolution photograph, was said to be in a bank vault in Johannesburg while the verification process takes place.

"It's totally unbelievable. You just don't expect this kind of thing to happen," said the company shareholder, Brett Jolly, in an interview in Johannesburg.

The man, who was visibly stunned, said the stone was about 7,000 carats and had been found at their operation in North-West Province on Monday afternoon.

Industry experts said the claim still needed to be verified.

The world's largest diamond, the Cullinan, the centerpiece of the British crown jewels, was discovered near Pretoria in 1905 and weighs about 3,000 carats. South Africa is the world's third largest diamond producer after Botswana and Russia.

Jolly, a British property developer based in Cape Town who is one of a number of investors in the diamond mine, said he was in a meeting on Monday when he received a phone call informing him of the find.

"I was very skeptical but as the day went on and I received the picture ... I believe it is real," he said.

A picture provided by Jolly shows a clear faceted stone about the size of a softball with a light green tinge. Jolly has provisionally dubbed it the Jade Giant.

"If it is a diamond, we are looking at history in the making," said Ernie Blom, chairman of the South African Diamond Council and president of the World Federation of Diamond Bourses, after viewing the picture. "I would love to get my hands on it, just to have a look."

Blom said from what he could see in the photograph the gem did have the characteristics of a diamond in terms of its shape and color.

"It would be an extremely rare find. It would almost be like finding another Rembrandt," he said, adding that the largest stone that he as a veteran of the diamond industry has ever handled was 600 carats. "Nature has a way of delivering up surprises."

Blom said the stone would not only be rare for its size but for its color as well. Diamonds in South Africa tend to range from yellow to white in color while stones with a more green color are more commonly found in North Africa.

However, Blom said such diamonds were also mined in the arid part of South Africa that includes North-West Province.

It is unclear how long the verification process could take - anything from a couple of days to a few weeks, Jolly said.

He said he had been inundated with phone calls from various people expressing interest in possibly buying the stone but that other shareholders needed to be consulted before a decision would be made.

Jolly said the name of the company and identity of shareholders were not being revealed for the moment due to security concerns.

Blom said the diamond would have to be certified by a gem expert who would determine the purity of the stone.

Before it can be sold or leave the country it would have to be certified by the Diamond Regulator of South Africa, a statutory body that ensures protocols set by the Kimberley Process are followed in determining the origin of the diamond.

The illegal trade in "conflict diamonds" - sometimes known as blood diamonds - have fueled and funded wars in Africa, killing millions in Angola, Sierra Leone, Liberia and the Democratic Republic of the Congo.

"I can't see it being a hoax," Blom said. "I can't see there being any benefit for them if it is a hoax. Having said that, I reserve judgment until I know more."

"When it is an unknown mine, people ask questions and rightly so," he said.

Milner, like Blom, also could not put a price to a diamond that size. He couldn't even say what the Cullinan diamond would fetch today.

"What value do you put on something like that ... millions and millions of dollars. What is the Mona Lisa worth today," Milner said.

The world's 15th-largest rough diamond - about the size of a golf ball and known as the "Lesotho Promise" - was sold for US$12.36 million (9.76 million EUR) in October. The 603-carat stone was owned by the Lesotho government and mining company Gem Diamonds.

Sputnik Ratau, spokesman for the Department of Minerals and Energy, which is trying to promote the domestic cutting and polishing industry, said if the stone did prove to be a diamond it was a significant find for the country.

"It would have a lot of impact and prove South Africa's standing as a diamond producing country," he said.

Tom Tweedy, spokesman for De Beers, the world's largest producer of diamonds, said they were aware of news of the find but were waiting for confirmation.