Former U.S. astronaut Lisa Nowak is about to use temporary insanity defense on charges that she assaulted and tried to kidnap a romantic rival. 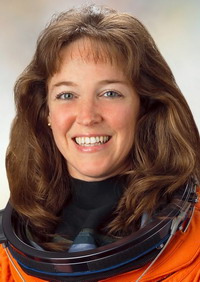 "This notice does not challenge competence to stand trial, but only raises insanity at the time of the offense," he wrote.

Nowak, 44, was charged with attempted kidnapping, battery and burglary with assault after allegedly driving nearly 1,000 miles (1,609 kilometers) from Houston to Orlando to confront Colleen Shipman, the girlfriend of a former space shuttle pilot Nowak had been involved with.

Nowak, who was dismissed from the astronaut corps a month after her arrest, has pleaded not guilty. Her trial is set for September.

Lykkebak wrote that two Texas psychiatrists would testify that Nowak was legally insane at the time of the alleged attack.

Circuit Court Judge Marc L. Lubet unsealed the notice of intent to rely on the insanity defense on Tuesday. Florida law requires such a notice before trial to let prosecutors prepare.

Danielle Tavernier, a spokeswoman for the state attorney's office, said prosecutors would address the issue in court and declined further comment.

Insanity defenses are tricky, and typically a last resort, said Ricardo Bascuas, a professor of criminal procedure and evidence at the University of Miami. The defense means Nowak essentially admits doing everything she is accused of, he said.

"It's difficult to convince a jury that you weren't responsible for your actions," Bascuas said.