Amadinejad says his country is a 'nuclear Iran' 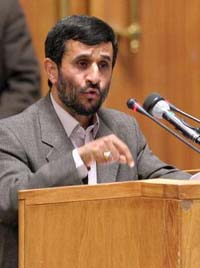 Amadinejad says his country is a 'nuclear Iran'

Tehran has achieved full proficiency in the nuclear fuel cycle, President Mahmoud Ahmadinejad reiterated Tuesday. He also said that dialogue and friendship - not threats - were the right way to deal with Iran.

"Today, Iran is a nuclear Iran," Ahmadinejad told a press conference in Tehran. "That means, it fully possesses the whole nuclear fuel cycle."

Ahmadinejad, however, said his country was committed to a "peaceful path" in pursuing its controversial nuclear program.

Ahmadinejad's comments followed an announcement Monday by the International Atomic Energy Agency which said that Tehran was offering some cooperation in the agency's probe of an alleged secret uranium processing project linked by U.S. intelligence to a nuclear arms program.

The IAEA has said that Tehran also outlined its timetable for providing other sensitive information sought by the Vienna, Austria-based U.N. watchdog in its investigation of over two decades of nuclear activity by the Islamic republic, most of it clandestine until revealed more than four years ago.

The U.S. criticized the deal with the IAEA, saying the agreement won't save Iran from a third set of U.N. Security Council sanctions for refusing to halt uranium enrichment.

Some in the IAEA have suggested Washington may be trying to derail important progress in the Iranian nuclear negotiations, in a drive to impose new U.N. penalties.

At the presser in Tehran, Ahmadinejad said the U.S. president was a "wicked, selfish and arrogant" leader who has abused the U.N. Security Council in a push to stop Iran's nuclear program.

Although the Iranian leader did not name George W. Bush, his remarks were clearly addressed to his U.S. counterpart.

"You saw that your coercion ... was futile," Ahmdinejad said. "Some wicked and selfish leaders stood arrogantly behind the podium to say, 'we won't let them do this' ... You sold out your prestige and stood against a cultured nation... I recommend that don't repeat this ugly behavior."

The U.S. and its allies fear Tehran is using its civilian nuclear program as a cover to produce atomic weapons. Iran denies the charge, saying its program is solely geared toward generating electricity.