The largest guerrilla group in Colombia will exchange prisoners within Colombian territory. 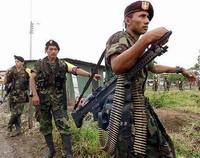 Raul Reyes spoke publicly for the first time since Venezuelan President Hugo Chavez last week offered his country as neutral ground to pursue an exchange of hostages held by the Revolutionary Armed Forces of Colombia, or FARC, for rebels held by Colombia's government.

In the interviewed published by Clarin, South America's largest-circulation daily, Reyes thanked Chavez for "this gesture" and called it a "new impulse" in efforts to resolve the issue.

"But we continue to maintain that any exchange, being a problem deriving from an internal conflict, must be resolved within Colombia," he told a Clarin correspondent at an unspecified "southern Colombian jungle" location. "We are not going to hand over prisoners in Venezuela."

The FARC holds hundreds of hostages, including former presidential candidate Ingrid Betancourt and three U.S. defense contractors, whom they say they will free in exchange for the release of imprisoned guerrillas and a temporary demilitarized zone inside Colombia.

Chavez is to fly to Colombia later this week to meet President Alvaro Uribe but said he will only press his mediation if Uribe and rebel leaders are open to the idea.