A self-described pedophile is leaving California after judge's order to stay away from places where children gather. 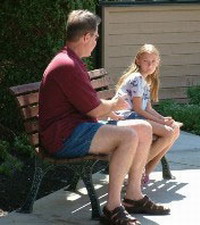 "I have to leave the state, really, I can't live here under this Orwellian protocol," Jack McClellan told KABC. "It's nightmarish."

McClellan did not immediately return a message left on his cell phone by The Associated Press.

McClellan has been unemployed and living out of his car since arriving in Southern California this summer from Washington state.

McClellan, 45, came to the attention of authorities for a Web site where he posted photos of children in public places and discussed how he liked to stake out parks, public libraries, fast-food restaurants and other areas where little girls congregated. His Internet service provider took down his Web site more than a month ago.

McClellan maintained he launched the site as a form of therapy and wouldn't do anything illegal. He has never been charged with molestation.

But on Friday, Superior Court Judge Melvin Sandvig issued a permanent injunction and a three-year restraining order that prohibit McClellan from coming within 30 feet (9 meters) of schools, playgrounds and other places where children congregate.

The judge's ruling narrowed an injunction issued earlier in the month that barred McClellan from coming near anyone under age 18 anywhere in the state. McClellan spent 10 days in jail for violating that injunction when he was arrested earlier this month near a child care center at the University of California, Los Angeles.

Sandvig's new ruling also bars McClellan from contacting, videotaping or photographing children or publishing their photos without written consent from a guardian or parent. McClellan could be arrested if he violates that prohibition.