It does matter to one puffin that his chosen companion is a one-legged. Puffins love company. 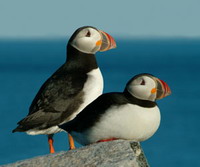 The deception is one of the techniques that Stephen Kress has used to lure the colorful birds back to this rocky island.

"I used an old hunter's trick, something that hadn't been done with seabirds before," Kress, director of the National Audubon's Seabird Restoration Program, whispers as he watches from a blind about 20 yards (meters) away.

Puffins, which resemble half-pint penguins except that they can fly, were heavily hunted along the Maine coast for their meat and feathers, and by 1901 only one pair remained, researchers said.

They remained plentiful elsewhere, however, and Kress set out three decades ago to bring them back to Maine's islands, on the southern end of their range around the North Atlantic.

In 1973, with backing from the National Audubon Society and help from the Canadian Wildlife Service, Kress began transplanting 2-week-old puffin chicks from Great Island off Newfoundland, 1,000 miles (1,600 kilometers) to the northeast.

Each summer, biologists move onto the island to oversee the project and to protect the seabirds. Two supervisors spend the whole summer on the rocky outpost, joined by rotating shifts of interns and volunteers.

A human presence is necessary to scare away predators such as great black-backed gulls and herring gulls. The large gulls - black backs have a 5.5-foot (1.7-meter) wingspan - rob nests and eat chicks. Earlier this summer, when five days of fog kept the volunteers away from Seal Island, another puffin nesting spot, the gulls destroyed eggs laid by 2,000 pairs of terns, Kress said.

The biologists are repaid for their protection by regular bird assaults.

Dive-bombing terns, screaming "kik-kik-kik," swoop down to peck at their guardians' heads.

Even worse are laughing gulls that take to the air by the hundreds. "Our hats, backpacks, shoes, shirts are pretty well covered in poop," said Jeff Kimmons, a co-supervisor.

The birds also keep up a 24-hour din of screeches and flapping wings, making it hard for newcomers to sleep in tents sheltered underneath poop-stained tarps.

Puffins are often confused with penguins. They have similar colors, and both swim under water using their wings as fins, but they are not related and live at opposite polar ends of the world. Each puffin pair raises one chick in a burrow under big boulders, taking turns feeding their offspring fish.

The breeding grounds are off limits to the public but several boat tours take nature lovers on cruises that circle the islands.

Last year, Audubon opened a Project Puffin visitor center in Rockland, drawing 10,000 people. Besides boat tours, Project Puffin operates Internet cams that show puffins inside and out of their burrows until the chicks leave by Labor Day.

The project is open ended. If the volunteers left, the puffins would be wiped out again by the gulls.