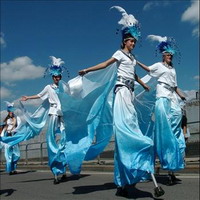 This year's theme, "Set All Free," commemorates the 200 years since Britain's abolition of the slave trade.

More than 1 million people are expected to attend the festival, which features processions of brightly dressed, Caribbean-style dancers and musicians.

Police said 250,000 people turned out on Sunday, which featured a children's parade. Boys and girls in purple-yellow robes, molded white masks and pink feathered headdresses shook their fists and stomped their feet to the thumping music.

Truck driver Richard Sunapek said the party reminded him of being back home in Thailand.

"For once the British are so relaxed you can bump into someone and they actually smile," he said.

Security was tight at the event, billed as Europe's largest street party. Police will serve an estimated 11,000 shifts throughout the party with several hundred on patrol at any one time, London's police force said. They have made 34 arrests so far - 13 on Sunday and 21 in planned raids before the event aimed at preventing troublemakers from crashing the party.

Three of the arrests Sunday were in connection with a man who was taken to hospital suffering from two puncture wounds to the abdomen. His condition was stable.

Launched in 1964 with a few Trinidadian steel bands, the carnival has grown into a major street event that lures partygoers from all over the world.