Semi-submarine loaded with cocaine detained in US

U.S. forces detained a submarine-like vessel loaded with tons of cocaine off the coast of Guatemala and arrested the crew. 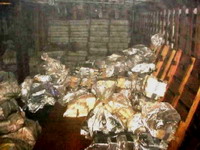 Semi-submarine loaded with cocaine detained in US

Four suspects were captured after they abandoned the self-propelled, semi-submersible vessel when it was discovered by officials from the U.S. Customs and Border Protection, U.S. Navy and the U.S. Coast Guard, the customs agency said in a news release Wednesday.

The vessel was intercepted Sunday about 480 kilometers (300 miles) southwest of the Mexico-Guatemala border, the Coast Guard said.

The craft, roughly 50 feet (15 meters) long, was abandoned by its crew as U.S. forces neared and sank a short time later. The boarding team from the USS DeWert found 11 bales containing 550 kilograms (1,210 pounds) of cocaine bobbing to the surface, the Coast Guard said.

Coast Guard officials said the vessel was estimated to have been transporting about 5 metric tons (5.5 U.S. tons) before it sank.