Jewish inmates are no longer provided meals in line with their beliefs. Muslims must now eat vegan food to satisfy their religious requirements. 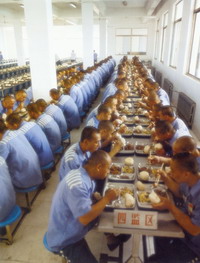 The Corrections Department has ended the Jewish Dietary Accommodation Program, which provided kosher meals to not only Jews, but to Muslims as well, because the state prison system does not offer halal food. Cost - and fairness - were cited as factors.

"We have 100 faiths represented by DOC inmates, so it would be impossible to satisfy everyone's preferences and unfair to do it for one group and not another," agency spokeswoman Gretl Plessinger said. "We just have to look at what our mission is and what's best for our overall department and the overall population of inmates in our system instead of a smaller group."

The department has suspended use of pork products in an attempt to appease religious adherents and will continue to serve vegetarian and vegan meals. It said many Jews and Muslims could choose the vegan option, which is free of any animal products, to adhere to their faiths.

But for the strict followers of kosher and halal diets, it is far from ideal.

Rabbi Jack Romberg of Temple Israel in Tallahassee, who was a member of a group that reviewed religious dietary accommodations in prisons, noted that unless the vegan food is prepared separately from other meals, it would not satisfy kosher law. Ahmed Bedier of the Council on American-Islamic Relations in Tampa said vegan food would meet the religious requirements of those who follow a halal diet, but would cause undue hardship.

"Either you have a choice of violating your own religion beliefs or you're coerced to only eat vegan," Bedier said. "That's probably not a reasonable accommodation."

Rules on halal and kosher foods are intricate, but at their core are similar in that both exclude pork and mandate a specific way in which an animal is to be killed. Kosher laws also dictate the way food is cooked.

The Corrections Department halted new enrollment in the state's Jewish Dietary Accommodation Program in April - when it had 259 inmates enrolled and another 95 seeking inclusion - and commissioned a review. Last year, the department opened the kosher meal program to non-Jews and officials have feared it would burgeon, along with the bill.

The study group that looked at the issue recommended more stringent screening of applicants to ensure they were not claiming religious beliefs simply to get different food. But the department said it wasn't feasible.

"It becomes impossible to really assess a person's faith and determine who should and who should not participate," Plessinger said. "By telling a person you're not faithful enough or not religious in your faith that's not really fair either."

"I wouldn't know why they wouldn't accept the recommendation," Romberg said.

The department said costs for the program ran the risk of running too high and could take away money from educational and vocational programming in prisons. There are about 93,000 inmates in state prisons, with an estimated 3.7 percent of them Muslim and 2.2 percent Jewish.

The state said it costs about $2.66 (1.96 EUR) daily to serve inmates three regular meals. Kosher meals cost the same, but with costs for disposable containers and transportation, since the food was not prepared in each facility, the price came to about $4.71 (3.47 EUR) daily. Prepackaged kosher meals would have cost roughly $12 (8.84 EUR) to $15 (11.05 EUR) daily per prisoner, according to the department, but also may have come with additional costs for transport and supplementation with additional food items.

A survey included in the study group's recommendations found that nationally, among 34 states that responded, 26 had kosher menus available. Out of 33 state responses, just five offered halal food.

Florida state regulations mandate three meals - at least two of them hot - be served to inmates each day, and that "inmates who wish to observe religious dietary laws receive a diet sufficient to sustain them in good health without violating those dietary laws."

The state was already the target of a still-unresolved lawsuit filed last year by the Florida Justice Institute on behalf of Muslim inmates denied meals in accordance with their diets. It was unclear if the latest move, which was effective last week, could bring further litigation.

Harry Dammer, a criminal justice professor at the University of Scranton who studies religion in prisons, said he did expect more lawsuits.

"The trend is to come up with this one alternative meal that will sort of encompass all of these parties," he said, "and it's not going to be easy to do."

The situation has always been imperfect. Even with in-house kosher programs in prisons, the kitchens cannot be considered kosher, and therefore the food would be unacceptable to strict Jews. And while some Muslims see kosher food as an acceptable alternative to halal, many others do not.