13:35
Spiegel: Germany demands Lithuania to lift the ban on transit to Kaliningrad
12:29
Henry Kissinger: There are three possible outcomes of the Ukraine crisis
11:53
Putin's decree causes securities of Japanese companies to fall
11:28
Russia lifts all coronavirus restrictions as COVID-19 incidence falls 64 times
19:10
Ukrainian MP says the capture of Russian regions was discussed at the NATO summit
18:26
Scholz names the conditions for lifting anti-Russian sanctions
17:40
Russian intelligence: Poland's working on scenarios for the dismemberment of Ukraine
17:01
Putin answers to Ukrainian's HIMARS with Sarmat and S-500
16:30
Emmanuel Macron ready for dialogue with Putin when necessary

A televangelist was badly bruised in a fight with her estranged husband as they met in an attempt to reconcile. 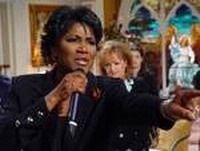 "She was bruised up and battered," Campbell told the Atlanta Journal-Constitution. "She had purple bruising around her neck and upper torso."

Weeks did not return a phone message or an e-mail request for comment Thursday by The Associated Press. A call to Global Destiny was answered only by a recorded message with information about the ministry.

Campbell told the AP on Thursday he was unsure if investigators had spoken with Weeks.

Asked about the fight, a woman who answered the phone at Juanita Bynum Ministries in Waycross said, "We're not at liberty to discuss it at this time." She did not identify herself.

Bynum is a former homemaker, hairdresser and flight attendant who became a Pentecostal evangelist. She got a break when Bishop T.D. Jakes invited her to speak at one of his conferences several years ago.

Her ministry blossomed after her "No More Sheets" sermon about breaking free of sexual promiscuity at a singles event. She writes books, records inspirational CDs and preaches to millions through televised sermons.

She married Weeks in 2002 in a televised wedding.

World
Putin answers to Ukrainian's HIMARS with Sarmat and S-500