A replica of a long-range missile, ridiculous posters that mock Israel and the United States await visitors of war museum. 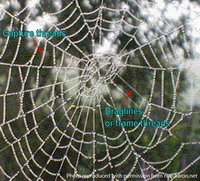 Welcome to "Spider's Web", a war museum south of Beirut that has become Hezbollah's latest propaganda tool - showcasing what it says was a divine victory over Israel in last summer's war.

The museum, which opened July 26 and runs til Sept. 10 as part of events by Hezbollah to mark the July-August war, exhibits war booty including helmets, boots, ammunition and armored military vehicles seized from Israel. It also contains gruesome photos of Lebanese civilians killed in Israeli airstrikes.

The museum has drawn strong condemnation from Israel. But in Lebanon, there has been no overt criticism, although the war did deepen already existing divisions among the Lebanese, many of whom opposed Hezbollah's capture of the two soldiers.

The title of the museum - set up in the Dahieh district of south Beirut, a Hezbollah stronghold pounded to rubble by missiles during the war - was inspired by a speech given by Hezbollah leader Sheik Hassan Nasrallah in 2000, in which he called Israel weaker than a spider's web.

Ali Ahmed, a spokesman for Hezbollah's media activities unit that organized the event, said the idea was to "commemorate Hezbollah's historic, strategic and divine victory in an honest and artistic way." Holding it in Dahieh, he said, was largely symbolic.

But Israeli Foreign Ministry spokesman Mark Regev said the exhibit "glorifies hatred, extremism and violence, and should be condemned as such."

More than 1,000 Lebanese were killed in 34 days of Israeli airstrikes during the war - after Hezbollah raided across the border, seizing two Israeli soldiers. Hezbollah launched nearly 4,000 rockets at Israel, killing 119 Israeli soldiers and 39 Israeli civilians.

Most experts agree Israel failed to achieve its publicly declared objectives of crushing Hezbollah and freeing its captive soldiers - a point the museum plays off heavily.

"See here how Israel was defeated and humiliated by the resistance," said one guide, pointing out a large metal chunk from the wreckage of an Israeli Yasur CH-53 Sea Stallion helicopter, downed in the south Lebanon village of Yater.

The guide, who goes by the name Abu Ali, carried a walkie-talkie as he eagerly explained to visitors, among them a few foreigners.

"What you see here constitutes only one percent of what we have," he said, standing next to war booty seized from Israeli soldiers displayed under glass panes in the ground.

According to the spokesman, more than 250,000 people have visited the museum so far and Hezbollah officials say they may extend its run past Sept. 10.

A French woman touring the museum said she had mixed feelings.

"They are using modern ways of communication to get their message across," said the woman, who would only identify herself by her middle name of Marie for security concerns. "Who knows if that's good or not?"

One section of the museum contains a poster ridiculing U.S. Secretary of State Condoleezza Rice for saying during the war that the fighting was part of the "birth pangs of a new Middle East."

Another poster mocks Israel's former chief of staff, Dan Halutz, quoting him as saying at the war's start: "We will eradicate Hezbollah within three days." Halutz resigned in January after widespread criticism of his performance.

The Israeli-made Merkava tank features prominently in the museum. One tank seized by the guerrillas is displayed in a huge crater, surrounded by mannequins of dead Israeli soldiers.

The guerrilla exhibit is not the first such event to be organized by Hezbollah, but new elements have been added this time, including replicas of front-line sandbagged Hezbollah bunkers.

One section is devoted to a new 3D computer game, "Special Force 2: Tale of the Truthful Pledge," that allows players to shoot mock Israeli soldiers and blow up their tanks. "Be one of God's men," says the advertisement for the game, shown on Hezbollah's Al-Manar television.

The game can be bought for USD 10 at a souvenir shop at the exhibit, along with Hezbollah DVDs and key-chains.

The exhibit ends with an audiovisual presentation featuring allegedly authentic sounds of dying and wounded Israeli soldiers crying out in pain, while an image depicts a destroyed Israeli tank surrounded by dummies dressed up as Israeli soldiers lying on the ground.

It is followed by Nasrallah saying: "The time of victories has started and the time for defeats is over."

"I've come to show my children what victory and dignity is," she said. "You feel such pride and security."