Pakistan Supreme Court in a historic decision on Thursday granted permission to former PM Nawaz Sharif and his brother Shahbaz Sharif to return to Pakistan. 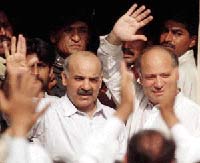 Sharif and his brother had been living in Saudi Arabia and then London in exile since 1999 military coup.

The SC panel headed by Chief Justice Iftikhar Chaudhry took the decision paving the way for Sharifs to return to Pakistan and by implication participate in the Parliamentary elections to be held later this year.

This verdict has come as a blow to President Pervez Musharraf, who had earlier stated that Nawaz Sharif‘s pardon would be revoked if he chose to return to Pakistan, reports Zee News.

Lawyers for Sharif, who is in London, appealed to the country's highest appellate bench to allow him back into Pakistan, saying the constitution guarantees him the right to return. The former leader was joined in the legal fight by his exiled brother Shahbaz Sharif, ex-chief minister of Punjab province, who was also in London.

The Sharifs "have the inalienable right to enter Pakistan at any point in time under Article 15 of the Constitution," the court in Islamabad said in the ruling today following hearings by a seven-judge panel headed by Chief Justice Iftikhar Muhammad Chaudhry. "Their entry into Pakistan shall not be restrained, hampered or restricted" by the government, the court said, reports Bloomberg.

Shahbaz refused to identify the gentleman who, as the signed document said, had negotiated the 10-year exile deal with the government of Pakistan on behalf of Nawaz, Shahbaz and the rest of Sharif family.

He did not deny having signed a document before the family left for Saudi Arabia which, he claimed, they did because of guns pointed at their heads and threats of dire consequences for the entire family, including their old parents, if they did not comply.

He said President Musharraf had kept sitting on the undertaking for almost three weeks while he was fighting for his life against a near fatal form of cancer, Pakistan Dawn reports.