Endeavour's astronauts thanked the engineers, managers and other NASA officials who helped them land safely despite a gouge on the space shuttle's belly. 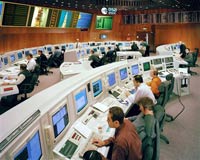 Endeavour's Tuesday landing in Cape Canaveral, Florida, ended a nearly two-week orbital drama that centered on a 3Ѕ-inch-(9-centimeter)-long gouge carved by a piece of foam insulation or ice during liftoff. NASA spent about half the mission studying the gouge before deciding it did not merit risky in-flight repairs.

During a homecoming celebration Wednesday at Houston's Ellington Field, Endeavour's seven astronauts had hearty praise for the engineers who studied the gash and the teams of scientists and robotics experts who walked them through delicate inspections of the damage.

"We never felt like we were just three people up there looking outside," astronaut Tracy Caldwell said. She and teacher-astronaut Barbara Morgan and pilot Charlie Hobaugh used the robotic arms on the shuttle and space station to create three-dimensional images of the gash.

Commander Scott Kelly also thanked the members of the public who wrote e-mails and letters to the editor questioning the decision to land without repairing the gash. While he said he appreciated their concern, he wanted them to know the crew never doubted NASA leadership.

Foam damage has been a major concern since a chunk of the material damaged Columbia's wing in 2003, allowing hot gases to seep in and break the shuttle apart during re-entry.

Endeavour's gash, although deep, was too small for scorching atmospheric gases to penetrate and cause serious damage, mission managers said during the flight. It was also on the belly, a more benign area than the nose or wings, which are subjected to much higher heat. The plate-size hole that brought down Columbia pierced the left wing.

Officials who checked out Endeavour on the runway said there was no apparent charring to the exposed felt fabric, the last barrier before the aluminum frame.

While in orbit, the astronauts attached a new truss segment to the space station and replaced a failed gyroscope needed for keeping the outpost headed in the right direction. They also delivered 5,000 pounds (2,268 kilograms) of supplies.

The crew completed four spacewalks, two of which were cut short. One was halted after a spacewalking astronaut noticed a cut in his glove. The other was abbreviated to give the crew enough time to prepare for an early departure from the space station.

Morgan, who was Christa McAuliffe's backup for the doomed Challenger flight in 1986, took time to answer questions from students in Idaho, Virginia and Canada.