Georgia said an aircraft from Russia had violated its airspace, raising tension just weeks after the ex-Soviet republic claimed a plane from Russia launched a missile on its territory near a radar site. 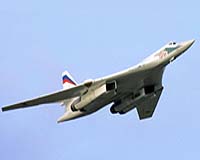 The announcement Wednesday by Georgia's Foreign Ministry of the incursion Tuesday into Georgian airspace came as the Georgian and Russian ambassadors to the United Nations traded accusations about the Aug. 6 incident.

That incident sharply escalated long-standing tensions between Georgia and its giant neighbor over the breakaway regions of South Ossetia - near where the missile fell - and Abkhazia.

Russia's U.N. Ambassador Vitaly Churkin accused Georgia on Tuesday of fabricating claims that a Russian plane entered the country's airspace and dropped a missile on Aug. 6 because it wanted to create "a political tsunami."

Georgia's U.N. Ambassador Irakli Alasania on Wednesday called the Russian accusation "absurd," saying two groups of international experts who examined the evidence agree that a plane crossed from Russian territory and launched a missile which landed about 5 kilometers from a Georgian radar site.

He accused Moscow of attempting on Aug. 6 "to use military force to destabilize a democratic state, and to attempt to influence its domestic and foreign policy."

Alasania said Georgia has concluded that the Aug. 6 incursion was an attempt to "intimidate Georgia and assess Georgian military readiness. It was also an attempt to demonstrate who is "the major player in the region" and ... test how far the international community will go to defend the young Georgian democracy," and to "send a warning message to former Soviet republics and to signal strong support for separatist regimes," he said.

In a possible new Russian provocation, Alasania pointed to the violation of Georgian airspace from Russia on Tuesday and said the Foreign Ministry had sent a note to Moscow "demanding immediate and clear explanations."

Two groups of independent experts that investigated the Aug. 6 incident agreed that Georgian airspace was violated three times that day by aircraft flying from Russian airspace. The first team was from the U.S., Sweden, Latvia and Lithuania. The second team, from Estonia, Poland and Britain, said their investigation on Aug. 18-19 found that the last two passes were towards Georgian radar near Gori, and the missile was launched approximately 10 kilometers (6.2 miles) from the radar site.

Churkin told reporters Tuesday that Russian defense experts who visited Georgia last week concluded there was no evidence of a Russian incursion on Aug. 6.