Stephen Colbert will auction the cast that helped mend his broken left wrist in honour of the Yellow Ribbon Fund. 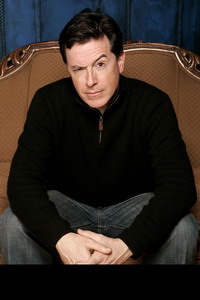 Bids will be accepted until Sept. 3, with the winner to be announced the week of Sept. 10 on the "Report."

"If I had known that it would give me the opportunity to help our wounded veterans, I would have shattered my triquetrum a long time ago," Colbert said in a statement.

The 43-year-old comedian injured his wrist June 27 in a fall while running around his New York studio before tapping an episode. He did not publicly reveal the injury until he was fitted with the cast, which he unveiled on the program's July 26 episode.

He has since created a red "WristStrong" bracelet, which parodies the yellow "LiveStrong" bands developed to benefit the Lance Armstrong Foundation.

Proceeds from purchases of WristStrong bracelets (which can be bought at www.colbertnation.com) will also go to the Yellow Ribbon Fund.