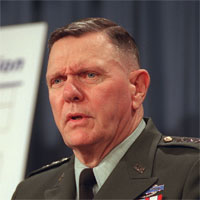 Former U.S. Army Gen. Jack Keane, who was vice chief of staff at the time the Iraq war was launched in 2003, said London had never deployed enough troops to properly stabilize the region around the southern city of Basra.

His criticism, which follows other sharp comments from both U.S. and British military officials and analysts, could be aimed at pressuring Brown, who is weighing a winter withdrawal of troops. Such a move which would increase Brown's popularity at a time some speculate he may consider a national election.

"I think there is a general disengagement from what the key issues are around Basra," Keane told British Broadcasting Corp. radio. "The Brits have never had enough troops to truly protect the population and we have found that out painfully in the central region as well."

Following the U.S.-led invasion, Britain held control of security in southern Iraq but has since handed over responsibilities to Iraqi police and military for three of four provinces. Officials say London hopes to pass control of Basra, the remaining district, to local forces by the end of the year.

Keane said security in Basra "has been gradually deteriorating, with almost gangland warfare and the lack of ability of the police to control that level of violence - so the situation is gradually getting worse."

The retired general, who recently returned from a trip to Iraq, said there was frustration among U.S. commanders, who fear they may have to deploy to the south if Britain decides to withdraw forces. The recent buildup or "surge" of U.S. forces in Iraq was based on a joint proposal made last year by Keane and Frederick W. Kagan of the American Enterprise Institute.

Around 500 British troops will be pulled out of Iraq within weeks once Basra Palace, Britain's last remaining base in downtown Basra, is handed to local forces, defense officials have said.

The withdrawal will leave around 5,000 British soldiers in Iraq, based almost exclusively at an airport camp on the fringes of Basra.