Brad Pitt visited the site of an environmentally friendly home being built in an impoverished New Orleans neighborhood based on the winning design from a competition launched by the actor to help the hard-hit area recover from Hurricane Katrina. 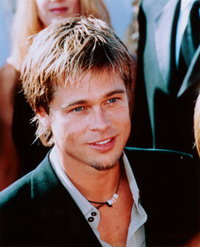 Wearing khaki pants, a T-shirt and hard hat, Pitt walked through the partially constructed home in the Lower 9th Ward, pointing out its many "green" features, including blue walls treated with a non-toxic repellant for mold and termites.

"There's light coming in from all sides and a lot of ventilation," said Pitt, standing in what will be the home's living room. "A lot of thought has gone into this house."

The three-bedroom, single-family home is the first of five slated for the Holy Cross section of the neighborhood based on the winning design in a competition launched in 2006 by Pitt and the environmental organization Global Green USA.

The winning design, submitted by Matthew Berman and Andrew Kotchen of Workshop APD in New York, includes energy saving appliances, a cistern, toilets designed for water conservation, soy-based insulation, paperless drywall, solar panels and a roof on the second-story deck designed to help insulate the house and channel water to the cistern.

The house is also designed to cut utility costs for the low-income families who comprised most of the residents of the neighborhood before Katrina. Pitt said electric bills will be cut by 75 percent; water use, by half.

Developers broke ground on the home in May and should be finished in the next month or two. It will serve as a model home and visitor center while construction of other houses is under way. Besides the single-family homes, plans call for an 18-unit apartment complex and community center.

Global Green plans to sell the homes, giving preference to former residents of the neighborhood.

Pitt and Angelina Jolie purchased an early-1830s masonry mansion in the French Quarter for $3.5 million (2.59 million EUR) in January.

"There's so much of this culture here that is unlike any other city that we have," he said. "It's a feeling that I can't quite explain, but I love being a part of it."

He expressed disappointment at the slow pace of recovery in much of the city.

"We can't ignore the fact that we've got to push to get these levees taken care of and correct the engineering mistakes of the past and get these wetlands taken care of for this city," he said. "It is something I'm quite aware of and wish to remain vocal about."

He said he, Jolie and their children would tour the Holy Cross site privately.